Matt Damon: Still Searching for Self in The Bourne Ultimatum 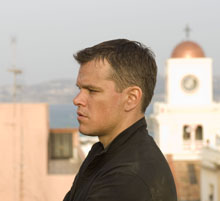 “This is a very small negative. It was implanted beneath the skin in your right hip. The numbers are in your handwriting; it’s your signature. With it, you can open a vault in Zurich.”

And so the action in Robert Ludlum’s book, The Bourne Identity, begins. Ludlum’s most famous series, The Bourne Identity and the two subsequent books in the trilogy, The Bourne Supremacy and The Bourne Ultimatum, chronicle the activities of Jason Bourne as he fights to discover, and then protect, his identity from his previous employers-turned-hunters.

In 2002, looking for its next action hero, Hollywood rediscovered this Cold War classic, and one of the most unlikely candidates was cast.

Up until his Bourne debut, Damon was not known as an action hero. Usually he focused on self-discovery roles like Good Will Hunting or, at a stretch, Dogma. And maybe he would never have been grabbed for the role if two of his previous pictures hadn’t become critic punching bags: The Legend of Bagger Vance and All the Pretty Horses. “[The Bourne Identity] saved my ass, and that’s completely true,” Damon said in an interview with Movieseer.com. “The weekend that it opened I was doing a play in the West End and hadn’t had a film offer in six months.”

When The Bourne Identity crashed into the box offices and eventually earned a cool $213 million, Damon managed to change some minds about his past failures as leading man material. And not to worry – he was going all the way with the Bourne trilogy.

The second installment, The Bourne Supremacy, topped the previous film’s take by $75 million – and a franchise star had been born. With two such successes behind it, we can only guess at what The Bourne Ultimatum will do when it hits theaters this August.

But don’t think Damon has taken his stardom in a stride. The Bourne movies tested their leading man’s acting ability as much as his physical prowess, and Damon had to fight to make himself a believable action star. Literally.

“My big fear and [The Bourne Identity director Doug Liman’s] big fear was that people weren’t going to accept me as the character,” Damon said.

And so, six months of intense preparation began. Damon couldn’t get away with playing the role to a point and then letting the stuntman take over the work – he had to embody the character in every way possible, and that included becoming proficient in the hand-to-hand combat skills that a trained killer like Bourne would know.

The attention to detail ranged from the massive to the minute. Damon underwent intensive training for six months for his martial art scenes and then did another six months with a boxing instructor just to learn how a boxer moved.

“Doug Liman decided that the way boxers walked was the way he wanted Bourne to walk,” Damon said in an interview with CNN. “There was a kind of directness in it and an efficiency about the way that they moved.”

Weapons were a whole other story. In order to affect ease while holding a gun, Damon needed some experience with weapons. He did so under the watchful eye of a S.W.A.T. instructor.

“The only way to kind of do that is to put in a couple hundred hours of shooting,” he said.

Damon’s training was a major factor in making the movies ring true, but much of the credit rests entirely on the heads of Liman and Paul Greengrass, the director of The Bourne Supremacy. Rather than closely following a tightly planned script, both of the directors shot and re-shot the scenes with new twists and different angles.

Some of the film was shot just two weeks before the movies hit theaters. The Bourne Supremacy’s theatrical ending was entirely different from the original conception by the directors and actors.

Greengrass filmed Supremacy with techniques he acquired on documentary shoots, making sure that the camera followed the action rather than the camera creating the action. Though this kind of filming is as tough on the crew as it is on the actors, it was just that kind of daring that made the Bourne movies turn the corner from second-rate spy films to box office hits; that, and careful reinterpretation of a 1980s series for modern-day audiences.

Though a chief complaint amongst the original fans of Ludlum’s series is how much the movies deviate from the books, many of the changes in character were necessary for Bourne to survive in the knock-down-drag-out world of Hollywood ringers.

In Bourne’s original conception, his true identity is David Webb, a U.S. agent posing as an assassin to lure out Carlos the Jackal, a famed European killer. Like in the movie, a vicious attack results in amnesia, but all of the clues point to a previous occupation as an assassin rather than “one of the good guys.”

Marie, Bourne’s lady love, is a Ph.D. economist doing recon work at a conference for the Canadian government. A far cry from the gypsy drifter portrayed in the movie.

The movie simplifies, making Bourne a CIA-trained assassin with a warm heart and sending it hurtling toward a final confrontation with his former boss who is now out to tie up loose ends.

The second movie is akin to the book more in title than anything else. Bourne and Marie have taken up residence in a secluded village under false names when an assassin comes looking for Bourne. By accident, he kills Marie, and a hunt for vengeance ensues.

Compare that to Marie’s kidnapping to encourage Bourne to take care of a little problem in communist China in the book, and you can see that more than just the toys and gadgets got an update for this new audience.

In the conclusion to the movie trilogy, Damon comes back as Bourne for one last time to finally get to the bottom of his still-mysterious past and the people who created him. His quest takes him across the globe searching for clues that will lead up to the final confrontation, and with Marie gone and nothing left to lose, he is more dangerous than ever.

“This is Jason Bourne, the toughest target you have ever tracked,” says Pamela Landy, played by Joan Allen. “He’s really good at staying alive, and trying to kill him and failing just pisses him off.”

Could the Bourne trilogy exceed its literary bounds and continue the franchise? Not with Matt Damon as a lead.

“We’ve ridden this horse as far as we can,” Damon said in an interview with Variety.

Perhaps a good choice. We wouldn’t want to see Damon surfing down an ice wave like that other spy series.