Sunshine: Global Warming's Not A Problem If We're All Dead 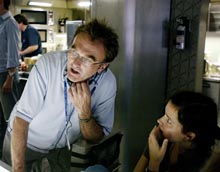 It taps into our deepest subconscious with the imminent threat of human extinction. Reminding us that our very livelihood relies on a celestial creation completely out of our control, the sun, Sunshine tells a story riddled with political implications, social responsibility and true self-sacrifice.

Danny Boyle has an entirely unique way of pushing the limits of reality that capitalizes on human weakness. In 28 Days Later and 28 Weeks Later, the Rage virus is reminiscent of a bad day of road rage or a temper taken too far. Its all-consuming effect that drives its zombie incumbents to rip apart family members tooth and nail is merely a hyperbole of everyday frustrations. Combining science fiction phenomenon with strains of human truth, Boyle uses this same technique in his direction of Sunshine.

Global warming and thinking green seem to be a reoccurring theme this year, in everything from fashion to film. At the forefront of everyone’s minds is the realization that our environmental neglect has very real and impending consequences.

Taking this nagging fear a bit further, Sunshine foreshadows a future when the earth has fallen into darkness and snow, and the sun, like your old kitchen light bulb, is about to go out completely. One mission of scientists, astronauts and psychologists has already attempted to deliver a payload to reignite the sun and mysteriously failed. Icarus II, the newest futuristic vessel to carry a competent team of true martyrs, is the last remaining hope to save the world.

So otherworldly even the most unrealistic technologies are believable, Icarus II has its own voice, that of an intelligent woman who verbally interacts with its inhabitants. Giving directions, negotiating and warning of ship malfunctions, Icarus dictates every aspect of the humans’ environment. This fact alone maintains a tension between humans and technology, creating a tug-of-war that technology is winning.

With the likes of Cillian Murphy (Batman Begins), Rose Byrne (28 Weeks Later) and Michelle Yeoh (Memoirs of a Geisha) on board, each member’s particular skill of the mission dictates their life’s worth. When the location of the first Icarus is discovered through SOS signals, a crucial course-altering decision is made.

What begins as an edgier Apollo 13 quickly morphs into a science fiction thriller with the Danny Boyle stamp of excellence through insanity. With beautiful cinematography by Alwin Kuchler, the awe of the characters is contagious, as they stare many times into the magnificent and fear instilling beauty of the sun. Literally sweating by the end of the film, I was immensely aware of my diminution in size and importance.

Maybe now you will consider buying that Prius or finally stop buying Styrofoam.