The Simpsons Movie: The 18-Year Wait Is Finally Over 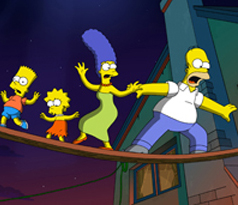 When Ralph Wiggum first pops in the “0” of 20th Century Fox, singing along with the logo’s signature tune, it may just bring tears of joy and “it’s about damn time” to your eyes. After 18 years, 400 episodes, 11,200,000 Web pages and an equal number of repeatable quotes, The Simpsons Movie is one of the most anticipated films of all time.

As Troy McClure observed, “‘The Simpsons’ have come a long way since an old drunk made humans out of his rabbit characters to pay off his gambling debts,” referring to Matt Groening creating small snippets of animation for “The Tracey Ullman Show” 20 years ago.

“The original title for ‘The Simpsons’ was actually ‘Filler,’” Groening jokes, who, along with 11 other veteran and current “Simpsons” writers, including current show runner Al Jean and Oscar-winning director James L. Brooks, finally gave the people standing in line for three hours outside the converted Kwik-E-Marts what they’ve been yearning for … for nearly two decades.

“It’s taken 18 years because we’re lazy,” deadpans Groening, the man with the world’s most ubiquitous signature. But Matt Groening is just as much in awe as the rest of the Simpsons fan base. “This is beyond most cartoonists’ dreams. Most cartoonists go into cartooning because they’re shy and angry. They’re sitting in back of class, drawing the teacher. In the beginning, I’d be introduced as a cartoonist and people felt sorry for me. They’d ask me to draw Garfield. Now, being asked to draw Bart and Homer, it’s unbelievable.”

Groening laments, however, that “The Simpsons” staff essentially work in the dark, only seeing the payoff of all their effort when they watch the show with their families. To create a communal Simpsons experience was one of his major goals: “I love the idea of 800 people laughing at the same time at a joke or scene in the film.” He adds, “With the movie, the attention we’ve gotten, the promotion, the Kwik-E-Marts … the enthusiasm is staggering. Yesterday, we were in Springfield, Vt. for the premiere and were given a key to city. It’s great – it opens up every door.”

Explaining the plot would give away some of the best jokes, so it will be summed up in Bart’s words, after Homer optimistically asks if he’s saved the day: “Actually, you’ve doomed us all.”

What else could one expect when Homer falls in love with a pig? The man who added “Doh!” to the dictionary neglects his family, instead focusing on taking the breakout star for walks on the ceiling while singing, “Spider-Pig, Spider-Pig/Does whatever a Spider-Pig does/Can he swing/from a web?/No he can’t/’cause he’s a pig.”

Homer and his non-Kosher companion’s environmental bumbling (Spider Pig poops. A lot.) result is a monumental Simpsons’ tale, fully contained so someone like Ted Kennedy – who stumped to get the premiere in Springfield, Mass. – can enjoy it (i.e., someone who’s never watched the show – has he seen Joe Quimby?); but with enough allusions to earlier episodes (look for a wink to 1990’s “Bart The Daredevil”) to placate Comic Book Guy.

“There are allusions to the TV show in the film,” adds Jean, “but the movie you actually see is complete. You don’t have to then watch the show. But if you like the movie, there’s a show that we can recommend. It premieres on Sept. 23 on Fox.”

That there’s something for everyone comes from the myriad writers on the project, which wasn’t always an easy feat according to Groening. “It’s sort of like trying to be amorous with a three-headed dog. You’re going to get licked a lot, but someone’s going to get bitten by the end of the night.”

This off-handed reference to Cerberus-in-heat is the type of comedy one can expect in the film. Says Brooks, “We’re so happy we got a PG-13 rating because of ‘Irreverent Humor Throughout.’ We won’t get a better review than that.”

“On the TV show,” says Groening, “we work very quickly, on tight schedule, a tight budget; and on the movie, we were able to work on a script until we got it right. We tried animation far more ambitious than anything we’ve ever done,” which includes Ansel Adams panoramics of Alaska (Homer: “Where you can never be too fat or too drunk!”) and a parody of bright-eyed helpful Disney animals.

There’s also a scene where Marge, voice cracking, delivers a soliloquy to Homer that’s as heartbreaking as anything the series, or recent romantic dramedy, has done. The freedom of not being on the tight schedule of the series allowed the team to do over 100 takes. Says director David Silverman, “This is a woman completely broken down – and we got there by breaking down the actress.”

Fans of the show need not worry that this signifies some sort of climax to the series; if anything, Brooks says, working on the film energized the entire “Simpsons” team. Plus, there’s an endless supply of material: “Government is our co-pilot,” jokes Brooks.

“We also have 300 characters on the show,” Groening adds.

“And we only have to pay eight people!” Jean retorts.

When Brooks sighs that nothing was more exhausting and exhilarating, he’s talking about making the film, but he could just as easily be referring to how you’ll feel exiting the theater after an 18-year wait. And as the final word of the film is “sequel?” does this mean…

“We started this movie because we had bought all the ownership rights to pink donuts,” Jean says. “So we’d have to think of a similar concept for movie two.”

The Simpsons Movie releases in theaters July 27.
Article posted on 7/24/2007
This article has been viewed 2401 times.