I Know Who Killed Me: (Sony) 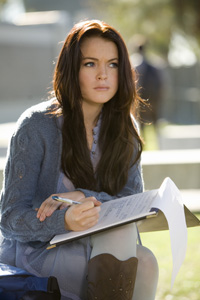 Oy Vey! It seems that, in an eventful week of coke-laden car chases, I get the dubious distinction of beating the dead horse that is Lindsay Lohan’s film career. I’ll try to keep this one short and sweet.

In I Know Who Killed Me, Lohan plays Aubrey Fleming, a coed with everything – perfect hair, great boyfriend and parents with deep pockets. She flutters about her ritzy neighborhood in skintight designer duds while working her gardener into an orgasmic frenzy just by checking him out.

Life is idyllic in these parts until one night when Aubrey disappears. Her friends try in vain to locate her but little does anybody know, she’s miles away undergoing the hellish torture of a local serial killer.

The next thing you know, Aubrey resurfaces – much tougher and with a decidedly “spicier” vocabulary. But this time, she’s got a new name and a wealth of naughty stories and memories that just don’t make any sense to anyone around her.

Is she lying? Is it amnesia? Do we really care? The answer to all three is no.

In her defense, Lohan rocks in this role. She’s sexy and captivating slithering around on a stripper pole or convincingly playing the victim (this is the movie I’m talking about, here). But the script is uneven, to say the least.

There is entirely too much plot crammed into this feature, and it’s terribly convoluted. Screenwriter Jeff Hammond appears to have purposely set out to create a doofus hybrid of The Parent Trap and Silence of the Lambs.

I Know Who Killed Me is currently in theaters.
Article posted on 7/27/2007
This article has been viewed 1500 times.