The Rocket Summer: A Kid with Dreams (Come True) 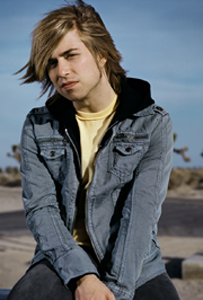 Bryce Avary of the Rocket Summer is a refreshing reminder of what’s still pure, honest and good about the music industry. His hopeful lyrics, fun and melodic tunes, down-to-earth personality, crowd-pleasing showmanship on stage and true dedication to music make him one of this year’s most promising new artists to hit the mainstream.

At a time when one-hit wonders, burnouts and instantly famous musicians are what’s “in,” there will always be room for genuinely talented musicians who have worked many years to bring you a piece of their souls in the form of a CD.

Avary is a quadruple threat with 10 years of experience in writing lyrics, singing lead vocals, playing nearly all the instruments and co-producing his latest album, Do You Feel. It’s a great album full of fun, rocking guitar riffs, pleading piano-laced ballads, catchy melodies and Avary’s amazingly strong and soulful vocals.

“I want people to feel hope,” says Avery, phoning from a restaurant in Texas after a long night of practicing for a yearlong tour with the band. “Hopefully, the record will do that for people.”

Bryce’s first major label album is dedicated to a time in his life when his passion for music led him into a brick wall of disillusionment and disappointment.

After many nights of touring in a van, sleeping on floors, getting sick and having gig money stolen (on more than one occasion), he finally reached a breaking point. His van had broken down, which resulted in the birth of “A Song Is Not a Business Plan.”

In the song, he describes his frustration with having to work twice as hard and having to continually prove himself while others take the easy route by selling out for money and instant fame. “This is me saying words I actually mean/I won’t compromise this thing just to make it/I’ll never do the things they do just to make it,” he sings.

Then, there were times Avary realized what was truly important in his life, including his faith in God, his music and his wife. Many of his songs speak to a desire to be a better person despite his inherent flaws and to make music that shares a message of hope in a fallen world.

He isn’t afraid to wrestle with questions of self accountability with lyrics like, “Why should I have to try to fix things I did not create or contrive?” in the title track, “Do You Feel.”

After 10 years of making music and touring independently, Avery found resolution to his trials and tribulations after being signed to Island Def Jam. He was then inspired to write all of the songs on Do You Feel.

He attributes most of his success and encouragement to persevere to his loyal fans that buy his albums and come out to say hello at shows. It’s been a wild ride, but he’s finally getting the exposure he deserves. He is also more aware of what it means to live life to its fullest and to share that message with the rest of the world.

And yet, you have to wonder if it’s possible to start out as a kid with a dream, run it through the mainstream music machine and come out unscathed and uncompromised. Will the Rocket Summer remain accessible to the fans and maintain its integrity in the face of the pressures to maintain a popular image, produce continuous hits for the masses and progress musically? Stay tuned.

Do You Feel is currently available. The Rocket Summer will perform Aug. 25 at the Home Depot Center in Carson as part of Warped Tour and Sept. 30 at the Wiltern in Los Angeles. For more information, visit www.therocketsummer.com.