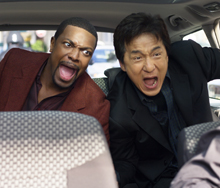 It’s been six years since the surprise box office smash Rush Hour 2 hit theaters. Yet the critics are already hailing the latest, Rush Hour 3 the best of the series.

So what took the movie so long to be made?

“The most difficult part was getting Chris Tucker to sign on,” reveals producer Arthur Sarkissian (Rush Hour, Rush Hour 2). “His feeling is if you have something extremely successful, if you push it too much you may screw it up.”

Tucker, who pocketed a cool $25 million for his participation, explains his motives.

“I’m a perfectionist,” he begins. “Everything I do I want to make it the best it could possibly be. I’ve only done a few movies, but two of them became classics, Friday and Rush Hour.

“It took a while because we never planned on doing another Rush Hour. But because of the success, the movie studio was encouraging us to do another. Then they wanted to do another, so they put the word out before they even talked to us. It’s almost like we didn’t plan on none of this happening.”

But as Tucker goes on to explain, there were many more important reasons the film’s production was delayed.

“I took advantage of my fame,” he begins. “I had great opportunities to learn what’s going on around the world. I took trips with President Clinton, Bono, Oprah Winfrey, Colin Powell, and I learned about a lot that concerned me in Africa, like clean water issues. It opened my mind up to the world.

“Being a big celebrity wasn’t that important to me. I’d rather use my fame to try and shine a light on problems around the world. I learned through that journey that when I do comedy I’m giving to people, making them laugh, making them forget their problems.

“It made me appreciate everything. That’s why I want to work more because the more people know who I am, the more I can talk about what I’ve learned.”

“The first time we met, I was talking to Jackie for an hour, and Jackie didn’t speak. That’s where I came up with the line: ‘Do you understand the words that are coming out of my mouth?’”

Chan shares his side of the story.

“Chris talks too fast,” he proclaims. “I was hiding from him at first. But he’s a shy boy. We were hiding from each other during the filming of the first movie. But it makes the movie work. We don’t know each other. Now we’re becoming friends. For Rush Hour 2, we were good buddy, buddy. Now he’s a brother.”

Besides the stunts and witty one-liners, it really is the chemistry between the two stars that has powered the film’s box office success.

“I look at these guys as the Bob Hope/Bing Crosby, Robert Redford/Paul Newman,” Sarkissian says. “It’s the relationship of these two guys that struck a chord, and no one went out to set that up. It just happened, and they pulled it off so well.”

While Sarkissian admits it’s hard to do sequels while keeping the integrity of the original, all parties involved believed they have achieved just that.

And so the crime fighting partners are off to Paris.

Writer Jeff Nathanson (Rush Hour 2) was one of the key players in securing the City of Love as the primary location.

“I think the goal of any Rush Hour movie should be to exploit what you have,” he says. “For Jackie and Chris, Paris provided the perfect landscape. You had great action potential with the Eiffel Tower for Jackie, and obviously, Paris provided some great comedic potential for Chris.”

While Ratner was positive they’d be able to film action sequences on the Eiffel Tower, Nathanson wasn’t quite as sure.

“I never thought we’d get the Eiffel Tower,” Nathanson says. “Brett said write it in the script, we’ll get it. Sure enough, we had the Eiffel Tower, and Brett had a little switch in his hand where he could turn the lights on and off on the Eiffel Tower. From midnight to 6 a.m., we owned that tower. Watching Jackie do stuff that has never been done before was amazing.”

“That was the greatest moment of my directing career,” boasts Ratner. “Turning the lights on and off on the Eiffel Tower!”

Besides Chan’s daredevil stunts on the tower, there are some other memorable moments in Rush Hour 3.

Tucker’s opening scene in which he’s directing traffic and listening to Prince’s “Do Me, Baby,” dancing like Michael Jackson.

And the scene in which Jackie Chan sings “The Closer I Get to You” on a swing.

“I heard that Jackie loved to sing and do karaoke,” says Nathanson. “You can see that Jackie is having fun. When they cut to him on that swing, you can’t help but smile.”

Then there’s Tucker fighting a Chinese giant, the world’s second tallest man by 1/4 of an inch.

“Bruce Lee in Game of Death fought Kareem Abdul-Jabbar,” relays Ratner. “I wanted to do the opposite. I thought they were going to bring me Yao Ming. He’s 7-feet, 2-inches. We found a guy in China 7-inches taller. I said bring him here. They rented an entire plane for him.”

“The script was done, and Brett said, ‘write a part for Roman Polanski,’” says Nathanson. “I wrote him as a sadist who’s beating up on them. Brett faxed him the pages, and he was in.”

Attal, a brilliant French director, plays George, a French taxi driver that shifts his attitude from hating Americans to longing to be an undercover U.S. spy.

“I saw Attal’s movie, My Wife is an Actress,” Ratner says. “It’s one of my favorite movies.”

So will there be a Rush Hour 4?

Chan’s schedule is booked through 2010.

And, as Sarkissian is quick to point out, “If Rush Hour 3 is what we think it is, I’ve already started talking to Chris about it.”