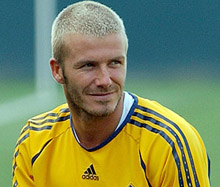 It’s hard to picture an entire stadium of people standing to cheer as they watch a man sit on the sidelines and tie his shoes – still, that is the effect of David Beckham on international soccer.

For a sport that remains an afterthought to most Americans, the L.A. Galaxy are betting on Beckham to help break down the walls of America’s persistent apathy towards the world’s most popular game. With their own version of the British invasion, the L.A. Galaxy and Beckham hope to signify a major change for the sport, both in Southern California and in Major League Soccer.

In his first match at the Home Depot Center in Carson on July 21, a capacity crowd made up of Galaxy faithful and a mix of Hollywood celebrities and those hoping just to get a glimpse of the new star cheered Beckham’s arrival prior to an exhibition game with the world famous Chelsea Football Club of the English Premiere League.

They cheered as he first entered the stadium, with Beckham rarely showing any sign of discomfort in an ankle that many thought would keep him out of his own debut. They cheered as he stood to jog, preparing to play in the second half, and the women hooted and hollered as he bent down to stretch and touch his toes.

There was even a stadium replay of Beckham, standing on the sidelines as he kicked an errant ball back to a teammate – his first touch in an L.A. Galaxy uniform. Finally, as he stripped off his warm-ups to reveal his now famous long sleeve jersey, the crowd erupted, welcoming Beckham onto the field for the first game of his five-year contract with the Galaxy.

While the MLS has been called a second class “pub” league by many in the soccer world, Beckham’s arrival and the fanfare that surrounds him have many famous footballers around the world turning their attention toward the States and contemplating their own arrival. With world-class players now interested in what America has to offer, Beckham might single-handedly be able to legitimize the MLS as a soccer powerhouse the way that Pelé and Franz Beckenbauer did for the short-lived North American Soccer League of the late ’70s.

However, while Pelé was an unstoppable attacking goal scorer, Beckham plays midfield and isn’t regarded as a world-class offensive threat. In fact, in his last four years and 146 matches as part of Spanish League Champion Real Madrid, Beckham scored only 15 goals.

In a country that celebrates home runs, slam dunks and touchdowns, what will America think of the footballer when they realize that he is much less a goal scorer and much more of a provider for his teammates?

Though both his on-field play and his ability to bring marquee talent to the team should help make the Galaxy perform better, until Beckham’s ankle is at 100 percent, they stand to benefit more from his celebrity status than his passionate play and patented “bending” kicks. Not only did his arrival in Los Angeles give the Galaxy a helpful attendance spike that should last both here and on the road, but the footballer’s famous name also helped sell over 300,000 jerseys in their first day of availability.

Add that revenue to the already sky rocketing ticket prices, and it’s easy to see that the Galaxy are prepared to make good on their investment. When he finally does return to full strength, the Galaxy hope to rebound from a dismal first half of the season as they couple Beckham’s talent with the strong play of veteran defender Abel Xavier and U.S. team captain Landon Donovan.

As steroid use, tainted referees and serious indictments further alienate fans from their favorite sports and players, a personality like Beckham, who is as attractive and humble as he is skilled, might be helping to find a game so loved by the rest of the world a new home at a perfect time. While it remains unclear what the league will look like when Beckham’s celebrity starts to fade or whether he can help save soccer here in America, if his debut is any indication, the future of soccer looks bright in Los Angeles.