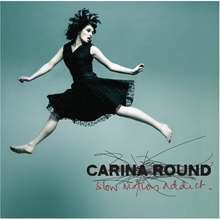 Slow Motion Addict careens around, slows down, but somehow never quite reaches its destination. There are some superb moments, but much of the album is spent trying to do too much.

A diverse palate is expected from British singer-songwriter Carina Round – everything from jazz, folk, rock, blues, dance and pop made appearances on her first two records.

But that’s not the problem.

The album begins with the impulsive and contagious “Stolen Car,” but quickly loses momentum for several tracks. Round’s at her best when the composition is raw and simple and her vocals are allowed to rise above the instrumentation, as demonstrated on “Come to You.” The title track that follows is disappointing in comparison, which leads to the next best and concluding track, the hauntingly beautiful “The City.”

There are many moments sprinkled with good possibility, but in the end it feels like being cheated out of a winning hand as you watch it happen … in slow motion. I guess I’m more of a fast forward addict.