The Used: Lies for Liars 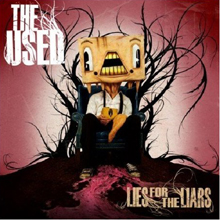 As the opening chords of “The Ripper” tinker between driving guitar riffs and Bert McCracken’s signature screamo vocals, the Used’s third album, Lies for the Liars, is full of emo rock promise. Sadly, that promise turns south, and the album fails to capture the sweeping experimental sound of the genre that has been successfully tackled by bands such as My Chemical Romance and Fall Out Boy.

The intention of Lies seems to be to break out of the typical emo rock shell, but not only does it not create anything new, it samples from bands that are doing the experimental genre a bit better. The sweeping melodies and violins on “The Bird and The Worm” sound like they were swiped from an AFI album.

Creative loops of typewriter dings and tape ripping noises open “Find a Way,” but the songs falls straight into the hushed sound that caused the band’s last album, In Love and Death, to tank.

Perhaps the worst on the album is “Liar Liar [Burn In Hell].” The lyrics for this track actually recall the old grade school taunt “Liar, liar pants on fire” for the chorus.

Overall, the album is listenable. The Used maintains its Hot Topic level of catchiness, and Lies for the Liars rocks enough to appease loyal fans.

Lies for the Liars is currently available.