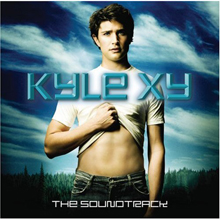 Last season very little was known about Kyle, the character played by Matt Dallas on the ABC Family show “Kyle XY.” But this season the truth came out – Kyle is better described as a super test tube baby.

“Kyle XY” is simply about the things an ordinary teenager is concerned with. A lot of angst flying around and it’s reflected in the kind of music that’s heard during the show.

The emotional roller coaster ride of a typical episode is paralleled by any of the well-chosen pop tunes on this album; “Bug Bear” from Climber is the moment of quiet introspection, “Surround” by In-Flight Safety grabs at a shred of positivity and eventually O.A.R. represents the good times with the appropriately titled “Wonderful Day.”

The show has kind of replaced the late “The O.C.” as the place to break new music, and the soundtrack represents a mix of artists that are already on their way (Earlimart, Irving and Sherwood) along with upstarts like Mariana’s Trench, the 88, Sean Hayes and Kate Voegele.