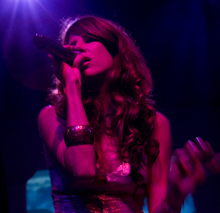 It’s been over a year since Bitter:Sweet released The Mating Game, and now they’re touring in support of a new remix album, appropriately titled The Remix Game.

The El Rey provided a perfect setting for the caliber of performance that Bitter:Sweet offers. Shana Halligan and Kiran Shahani were joined by the expected instruments (guitar, drums, keys, bass played by Shahani) and also by a DJ, cellist and harpist.

The cello and harp join with Halligan’s ethereal vocals to produce the kind of music heard in dreams. It’s hard, with all the production that goes into most albums these days, to find a vocalist that sounds as good live as on CD, but Halligan sounds just as good, if not better.

Bitter:Sweet’s music is moody and dramatic without losing its playful, lounge band appeal. Halligan willingly plays the role of the sexy lounge singer as she slinks around the stage in her luminescent gown and flowing red, curly locks. Shahani is the perfect counterpart for her onstage as the low-key but achingly smooth bass player.

Bitter:Sweet is the perfect band for a modern-day fairy tale ball, and it wouldn’t be surprising if it turned out that Halligan was the Fairy Princess and Shahani the Prince Charming teaming up to sweep you off your feet and onto the dance floor with their luscious grooves.