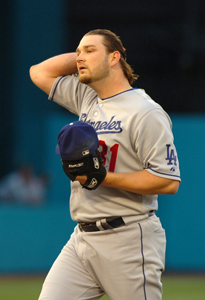 As the Dodgers took on the Mets July 19 through 22, both teams were situated at the top of their respective divisions and the match-up between them had the air of a playoff showdown. While some in attendance might have allowed their minds to wander and could see these two teams facing off in a seven game series later this fall, this writer’s thoughts were on another epic match-up, on another “game seven” like finale ...

Although we were engrossed by this Mets-Dodgers battle, we couldn’t help but wonder the fate of Harry Potter and ponder the fall of Lord Voldemort. As it turns out, July 21 not only marked the 535th match-up (the series is 296-239 in the Dodgers favor) between these two storied franchises, but it also marked the release of the final book of the famed Harry Potter series.

So as the Friday game approached, the witching hour thoughts of baseball quickly turned to Quidditch. Before this meager muggle’s mind knew it, I had begun to mix up the realms of Harry P. and Nomar “GarciaP.”

After all, when you think about it there are a lot of similarities between the two worlds.

The Mets are sort of an evil offshoot of the Dodgers (sort of a Slytherin to the Dodger true blue’s Gryffindor). And just like Harry has an unusual kinship and ties to his nemesis Voldemort ... the Dodgers have inexorable ties to the Mets as exemplified by the fact that there are 13 ex-Dodgers currently on the Mets roster.

So with Harry Potter on the brain, we decided to rundown the Dodgers-Mets series with an HP theme.

There seemed to be a curse on pitching this Thursday evening. Expelliarmus ... would be the operative word of the night. If not to describe the quick dispatch and disarming of the pitchers (both starting hurlers’ had their shortest outings of the year as Glavine would go just two innings giving up 10 hits and six earned runs while his opponent Lowe went three innings also allowing 10 hits and eight earned runs), Expellarimus would also aptly describe the ball as it kept leaving the park.

There were five home runs in all, three from the Mets – Carlos Delgado, Ramon Castro, Carlos Beltran – and two from the Dodgers – Matt Kemp and Jeff Kent. Glavine was hoping to make history by earning with his 299the career victory, but old Tom couldn’t earn the decision despite being spotted a seven run lead in the first inning and the W ended up going to ex-Dodger Aaron Sele.

In contrast to first game, Oliver Perez and Brett Tomko were locked in a 1-1 pitching duel until the seventh inning when a costly throwing error by Dodger reliever Roberto Hernández threw open the gates to a Mets three run eighth inning. Tomko made his second impressive start since replacing an injured Randy Lupin ... we mean Wolf. Tomko seemed bitten as he only allowed an unearned run, scattering five hits over six innings.

“When Randy comes back, he’s going to be in the rotation,” Tomko said. “In the back of your mind, you wonder where you’re goin’ to fit in, but that’s really not my decision. If I keep going out and pitching well, I’ll put pressure on them to make a decision.”

After taking a 4-0 lead in the first inning and with Mets up 2-0 in the series it looked like it was time to break out the brooms (or should we say broomsticks) as a Mets series sweep seemed imminent. But Brad Penny rose from the ashes after a shaky first inning as he steadied himself and went six and 1/3 innings, scattering six hits and allowing only three earned runs.

It was only the third time in his last 11 starts that the two-time All-Star allowed more than one, but it was good enough to earn Penny his league leading 12th victory. Selected in the fifth round in 1996 by the Arizona Diamondbacks, Penny is paying big dividends for the Dodgers as he attempts to lead the National League in wins for the second consecutive season.

He has been money all year ... and by money we think Penny is worth all the gold Galleons in Gringots.

This game could be classified under the number “9 3/4” as it ended up going past the usual 9 innings. The Mets won three of the four games emerging with a 5-4 victory in the 10th inning in the final game of the series.

The star of the finale was none other than No. 7. Jose Reyes almost hit for the cycle as the All-Star shortstop had a single, double and triple and scored two runs.

However, the hero of the game for the Mets was minor league journeyman Chip Ambres, who slapped a clutch pinch-hit single in the ninth inning. Luckily for the Mets, the Zepher got the word of his call up on time (perhaps via owl gram) as he was playing for their New Orleans AAA affiliate just the day before.

The Dodger’s hero or “Harry,” Nomar Garciaparra, came up empty in the game’s final at bat. Despite leading his team with two HRS in the series, Nomar was no more as he struck out against the formidable Billy Wagner with men on 2nd and 3rd.