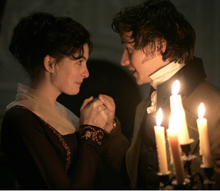 The death of Audrey Hepburn left the door wide open for another charming, doe-eyed brunette to steal moviegoers’ hearts. Anne Hathaway has filled that void with a star-making performance in Becoming Jane.

As 18th century author, Jane Austen, Hathaway uses her subtle beauty and poise to imagine what love must have been like for this young woman who seemed to have a lock on the subject.

Becoming Jane makes no secret about the fact that it’s only loosely based on the scenario that might have occurred between this young couple. It also takes a little while to kick into full gear.

However, once the story begins to unfold, it does so with exciting clarity and brilliance. There is also a wealth of eye candy in the film.

Laurence Fox is miscast as the guy who gets left behind. He’s much too tall, mysterious and well-built for such a distinction. The women are buxom and beautiful as well.

With all of the spark and flavor that Hathaway’s Austen exudes in the film, it’s so sad to realize that this woman who knew everything about love, never found the real thing for herself.