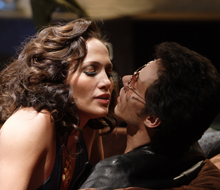 El Cantante (“The Singer”) is a film that celebrates the life of Hector Lavoe, the King of Salsa. The film follows the life of Lavoe (Marc Anthony) and his rise to fame as a Latin artist during the 1960s and 1970s. Combining his Puerto Rican roots with street smarts from New York, Lavoe created a sound that audiences worldwide connected with in their own lives.

The film is told from the perspective of Puchi (Jennifer Lopez), Lavoe’s wife. In an interview shot after the singer’s death, she tells the tales of their life together through various flashback sequences.

Although Lavoe could express joy, love, pride and pain in his music, he had difficulty in dealing with the pain in his life. Turning to self-destructive behaviors, the film follows Lavoe as he enters a downward spiral full of drugs, alcohol and sex when faced with stardom.

Having a real-life couple cast as the two main characters could’ve been distracting and disastrous, but Lopez has real talent when put into the right roles.

Although the film works as a tribute to Lavoe, as a film about salsa, I was hoping to leave the theater wanting to take dance lessons, as opposed to feeling depressed and sorry for yet another star that has it all and opts to throw everything away with drugs and alcohol.