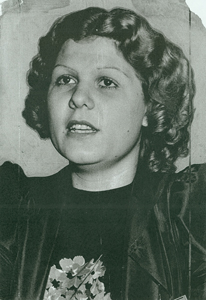 Girl 27 recounts a scandal so true it’s hard to believe; essentially the greatest exercise of Hollywood’s long arm to date, as they successfully complete a scandalous cover-up.

Patricia Douglas, underage and a self-proclaimed loner, found solace in her career as a dancer. This sense of comfort and belonging drew her to join the ranks of many other young chorus girls; desperately seeking work or recognition, while being blindly shuttled from one film set to the next.

Tricked into entertaining at an infamous MGM party where there were more champagne and scotch bottles than attendees, Douglas was viciously raped by a party attendee right outside the party’s walls. What ensued was the work of one Louis B. Mayer, president of MGM studio as well as the greater L.A. area.

Mayer’s multitude of pay-offs and blackmails made Douglas an outcast and swept her claims quickly under the rug. Taking care of its own while turning its back on challengers, Hollywood’s reputation as a ruthless power player only grew from this incident.

Combining archival footage from old musicals, newspaper clippings and contemporary interview clips with industry and legal “experts” and the actual despondently hardened testimony of Douglas, Girl 27 is a by-the-books kind of film. Using the intrigue and integrity of the subject matter as a crutch, this film neglects to showcase any sort of actual filmmaking, missing an incredible opportunity to make a film of great social impact.

Girl 27 is currently in select theaters.