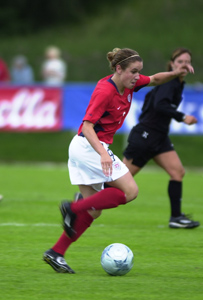 Followed by billions of fans around the planet, soccer is a watchword for the agony and the ecstasy of sports. In September, the Women’s Soccer World Cup is taking place in China, and striker Heather O’Reilly is hoping to be a major asset to the USA team.

One of the rising stars of women’s soccer and already the proud owner of a 2004 Olympic gold medal, she’s currently studying Education at the University of North Carolina. While it’s no surprise that she loves Carolina Blue and the Tar Heels, it was almost a fairytale when she scored her first international goal against Italy during the Nike U.S. Women’s Cup.

O’Reilly was born and raised in East Brunswick, N.J., but last year she moved across the country to Southern California to spend several months preparing for the next stage of her career: the World Cup.

“Because there is no professional league in the U.S., it’s necessary that we have the training opportunities, U.S. Soccer put together a six-month program for us to play together day in and day out.”

As for her greatest moment, O’Reilly is hoping that it may change at the World Cup, as long as she makes the trip to China.

“My biggest sports thrill thus far was winning the gold medal at the Olympics. However, the World Cup is the ultimate goal for any soccer player, and though ultimately the decision about the team’s personnel is up to the coach, I think if I keep working hard everyday at training and improving in my weak areas, I can put myself in a good position. I think I can really help this team.”