Manet's A Bar at the Folies-Bergère: Now-Sept. 9 @ The Getty 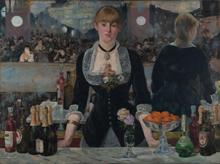 Much controversy surrounded the unveiling of Édouard Manet’s A Bar at the Folies-Bergère in 1882, and intrigue continues to swirl around the masterpiece today. A Parisian venue showcasing acts from ballet dancers to circus performers, the Folies-Bergère was at the height of its popularity from the late 1890s through the 1920s.

Legendary entertainer Josephine Baker became an overnight sensation after performing her suggestive “banana dance” – wearing little more than a skirt made of fake bananas – on the Folies-Bergère stage.

Other “stars” of the Folies-Bergère were its barmaids, who were commonly suspected to be clandestine prostitutes. Manet captures one of these women and her male customer in his famous painting.

Not only are the subjects of this piece intriguing, but the way they are placed on the canvas presents a cause for debate among many artists and scholars. The barmaid stares directly into the viewer’s eyes, yet the mirror behind her reflects her body and the objects around her from a viewpoint that is contradictory to her position.

The painting has raised questions that have perplexed and inspired many for over 100 years. At the Getty exhibit, a mirror has been installed on the wall opposite the painting so that passerbys can look at the image’s reflection and ponder the many reasons why Manet chose to displace the objects of this work, and in doing so challenged the traditional notion of painting-as-mirror.