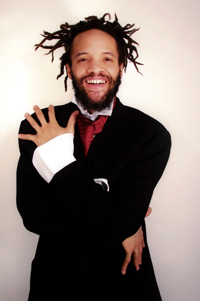 Savion Glover talks with his feet. Replacing words, he taps out his emotions, his history, and if you listen closely, his future. Watching and hearing the hoofer onstage at the Hollywood Bowl, it was evident Sav was happy. Adventurous. Boisterous. Giddy.

The man was focused on his feet, and the audience mesmerized by them. Unlike many tap dancers of the past, Sav likes to hit – and hit hard.

Still graceful and gracious in his movements, he’s not light on his feet. He’s intense. He slams. He makes a million sounds with one stomp.

Tap dance is not one of the most practiced or performed art forms. It’s left field, and the artists who dedicate themselves to it are unique. Sav is definitely one-of-a-kind: the greatest tap dancer alive.

Still a young man, the dread-locked master has accomplished a lot in his short life: Tony Award winner for “Bring In ’Da Noise, Bring In Da Funk,” recipient of a Drama Desk, two Obie and two Fred Astaire Awards, to name a few, TV star (“Sesame Street”), movie celeb (“Bamboozled”) and on and on. While celebrating his illustrious present, Sav has always paid homage to the past, particularly his mentors; tap masters like Lon Chaney, Sandman Sims, Buster Brown, Honi Coles and of course, Gregory Hines, whose image appeared on his T-shirt during the second act.

Sav is one of the fortunate dancers to have been taken under the wings of the old-timers. And he, to his credit, soaked everything up. He is the embodiment of the best of the past, while taking tap into the future.

To watch him is to watch the evolving art form.

Backed by the Hollywood Bowl Orchestra, led by conductor Bramwell Tovey, it was obvious the two men had tremendous respect for each other. Having conducted for ballet dancers in the past, Bramwell is knowledgeable about the movement of dancers.

Call me biased, but Sav is amazing – in any medium. He has proven time again with each new performance that he’s the one to carry tap’s torch.