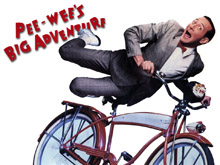 Nobody is more famous for their big adventures than Pee Wee Herman, and now in the annual Cinespia event, Pee Wee’s Big Adventure is hitting the … side of a wall?

Cinespia screenings are hosted in one of the eeriest possible locales – the Hollywood Forever Cemetery. Flanked by gravestones and mausoleums, moviegoers picnic on the grass and watch their favorite films projected onto the bare faces of one of the cemetery’s buildings.

It’s a big adventure, in and of itself, and so where could it be more appropriate to watch the Tim Burton-directed hit starring the hilarious, and controversial, Paul Reubens?

Pee Wee’s in a pickle. His prize possession, his bike, has been stolen, and it’s up to Pee Wee to reclaim the cherished vehicle. He crosses the country in hot pursuit of the thieves, directed only by a fortune teller’s prediction that he will find his bicycle in the basement of the Alamo.

Along the way, Pee Wee manages to meet an unlikely bunch of characters, from truck drivers to ex-convicts and every level of ridiculousness in between.

But if the movie isn’t enough to bring you in, perhaps the cemetery is.

Founded in 1899, the cemetery harkens back to more traditional roots with huge monuments to the dead surrounded by sculptured landscaping and lovingly tended burial plots. The unique appearance of the cemetery adds an elegant but macabre air to the cinematic and theatrical events hosted here.

For those of you armed with “Star Maps” for your cruise around the Hollywood Hills neighborhoods, take a swing through this cemetery to spot stars of yore in their final resting places. Mel Blanc (beloved “Merry Melodies” voice actor), Cecil B. DeMille and Johnny Ramone amongst many others are buried at Hollywood Forever.

Before going to check out the movie, make sure you have a few necessary items. Picnic dinners are essential and alcohol is allowed, but even more important are blankets and pillows or chairs. Nothing ruins a movie like back pain. And get there early – these shows are packed with regulars.