King of Consistency: Talib Kweli Rocks the Bells- and Your Ear Drum 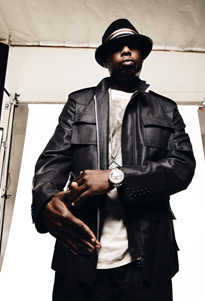 Rapping for nearly two hours and serving up over 22 songs at the House of Blues Sunset Strip this past April, Talib Kweli delivered a show packed with classics from Black Star and Reflection Eternal, collaborations with Madlib, plus rockin’ solo joints from his forthcoming sixth CD, Ear Drum.

“The art of MCing is the interaction between the MC and the crowd,” explains Kweli, sitting at a sidewalk café near his new digs in Studio City, Calif.

“Throughout my career, whether I’ve had a radio record or not, I’ve been able to practice the art of MCing in order to feed my family. So the performance holds a special place in my heart. Performing on stage makes it all worth it.”

Kweli knows showmanship. Backed by a longtime manager and now partner-in-label (Blacksmith Music), Corey Smyth, who was groomed by De La Soul starting in ’96, these two have been busy building a brand, with Kweli as the face.

Yet the question on most fans’ minds is, what has taken his latest album so long to be released?

“It just wasn’t ready,” Smyth points out. “Talib is one of those artists that gets into the groove as the CD progresses. The joints just kept getting hotter as he worked.”

With an Aug. 21 release date now in sight, Kweli boasts about Ear Drum as yet another testament to his consistency, a quality he’s most proud of.

“That’s what I’m trying to do with the music. Often with my music, and with me as an artist, people comment on the fact that my music is conscious or positive or whatever. I think that the idea of me being a musician is sometimes lost.

“I’ve been very fortunate and blessed to have a good ear and to work with musicians who are extremely talented. Whether or not people approve of my beat choices that I rhyme over or not is irrelevant. I know that my career is where it’s at because of the choices that I’ve made in music.”

Ear Drum is the first project to be released through Blacksmith Music/Warner Brothers. “Every record I’ve gained more experience and more resources and more know-how, and I try to apply it to the situation,” Kweli begins. “The thing that I’ve learned that’s most precious is being part of a team. I’ve always been a team player from Reflection Eternal to Black Star and now with Blacksmith, working with Jean Grae and Strong Arm Steady. Their situation to me is every bit as important as my record right now.”

Naim Ali, VP of A&R for Warner Brothers who works with E-40 and Mike Jones was enthused to sign Blacksmith.

“Talib and his crew are at the forefront of everything, sonically to image-wise. It was important to put him in position where he could put on other MCs and artists that he sees something in them,” says Ali.

Like the underground version of Dame Dash and Jay-Z, Smyth and Kweli (Smyth is from Harlem and Kweli from Brooklyn) will continue to show and prove because as Smyth will tell you, “You can’t stop what we do. I’ll show you that you can’t fuck with what we do. I challenge anybody. It has nothing to do with arrogance. It’s just that I know I’m going to work harder than everybody.”

In addition to touring to promote Ear Drum, Kweli also hopes to craft a script or two now that he lives near Hollywood. After all, he attended NYU’s Tisch School of the Arts before rapping.

But music will always be his first love; a consistent love. One in which he feels free to be who he is.

“Talib is my real name,” he emphasizes. “You can be who you really are. Hip-hop is based on caricatures, and you don’t always have to create one. You can speak your real feelings and speak from your heart.

“I think honesty is what a lot of the music is missing. As long as you’re honest, that’s what drives record sales and lights the fire under what we do. What you hear on record is very close to who I am.”

Ear Drum will be available Aug. 21. Talib Kweli will perform Aug. 11 at the Rock the Bells Festival Series 2007 at the Hyundai Pavilion in San Bernardino. For more information, visit www.talibkweli.com.