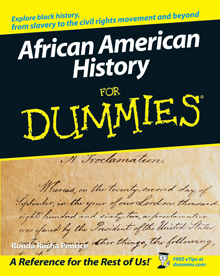 Although rock ’n’ roll no longer dominates the top of the charts, it’s still cemented in most of our minds that rock ’n’ roll isn’t a diverse enterprise. In the United States, the correlation between rock ’n’ roll and race is particularly deep.

While the Rock and Roll Hall of Fame and Museum in Cleveland has inducted such African American music luminaries as the Isley Brothers, Aretha Franklin and James Brown, African Americans are largely missing from most of the popular images of that era. Today, many of us can’t even relate to those times.

While a great number of us, regardless of our racial and ethnic backgrounds, enjoy the same forms of music, it’s hard to imagine that wasn’t always the case, especially in light of how embraced African American artists are today. For those who’ve grown up in an era where MTV regularly mixes in videos from various artists, it’s hard to fathom there was a time when artists such as Michael Jackson and Run-D.M.C. were lauded for breaking racial barriers.

By no means do we want to return to those times, but it’s in our best interest to recognize the realities of our past. It’s easy for us to point to today and wholeheartedly believe our job is done.

In order for us to keep pushing forward to a more embracing society, be it in music in particular or life in general, it’s important for us to know the context in which we live today. For me, African American History For Dummies is the vehicle to recognize that African American contributions, in addition to those of others, to this country have been substantial. I hope the following excerpt goes a long way in communicating that point.

Rock-and-roll has black roots, a fact that may seem surprising given the relative scarcity of African American rock artists and rock bands today. Ike Turner’s 1951 recording “Rocket 88,” the first boasting a distorted guitar, contained the driving backbeat and electric guitar that became commonplace in rock-and-roll. “Sh-boom,” the first acknowledged rock-and-roll song, was recorded by the R&B group the Chords. Other black artists contributed to the new genre.

British groups like the Beatles and the Rolling Stones had no problems commending black artists for their talents, particularly Muddy Waters and Bo Diddley, who’s often cited as a key figure in the transition of R&B to rock-and-roll. Although classified as R&B during the 1960s and 1970s, Ike and Tina Turner’s style, in retrospect, was more rock-oriented, as evidenced on “Proud Mary.” Jimi Hendrix wasn’t only accepted; he was exalted.

Despite a heavy R&B tutelage that included playing with the Isley Brothers, 1960s guitarist Jimi Hendrix became a rock legend. (Hendrix’s reputation on the guitar is akin to that of bluesman Robert Johnson.)

Given the times, Hendrix’s talent may have gone unrecognized had he not recorded in England. Known for the hits “Purple Haze” and “Voodoo Child (Slight Return),” Hendrix received his due during his lifetime, but his sudden death in 1970, at age 27, elevated him to cult status.

Hendrix wasn’t alone as a contemporary rock titan. Sly Stone, along with his brother and two sisters, exerted considerable influence with his group Sly and the Family Stone. From 1967 to 1975, the rock group, whose members were predominantly black, created the hits “Everyday People,” “Hot Fun in the Summertime,” and “Thank You (Falettinme Be Mice Elf Agin).”

Mixing funk, soul, and the psychedelic culture of Bay Area hippies, Sly and the Family Stone created a rock sound and look that still distinguishes them. Black rock group Living Colour and Tina Turner, in her solo turn, continued that rock-and-roll legacy into the 1980s.

Excerpted with permission of the publisher John Wiley & Sons, Inc.m African American History for Dummies. Copyright 2007 by Wiley Publishing. This book is available at all bookstores, online booksellers and from the Wiley Web site at www.wiley.com, or call (800) 225-5945