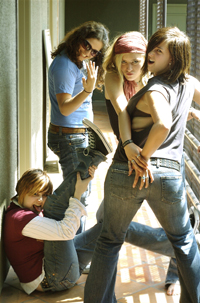 Down by the Seventh Veil Strip Club on Sunset, a group of girls is hanging out with not much to do hours before they’re scheduled to play a show at the Kibitz Room inside Canter’s Deli. They’re not hanging around a questionable place like the Seventh Veil because they want to see what’s inside; they just have nowhere else to go.

“We were like, let’s just get a by-the-hour hotel room so we can have a place to hang out … so we finally get a room and the clerk goes, ‘what are you guys, dancers?’”

The young woman who goes by the moniker Piss begins to explain the misunderstanding that took place in the lobby of a dive hotel not far down the street. “And I, thinking he meant ballerinas, go ‘oh yeah, we are, how’d you know?’ He leaves the room, and they all go, ‘uh, Piss, I think he meant strippers,’ and I go, ‘oh.’”

Though it’s true some of the members of the band Jade Banger used to be dancers, they were not of the exotic variety one might hope for. In fact, Piss, given name Lizzie Shipton, and bassist/vocalist Abi Colbeck used to dance ballet and jazz.

“I thought I was going to be a dancer [until I] realized I probably wasn’t skinny enough, and a lot of bass players I knew weren’t that skinny, so I picked [the bass] up and was like, ‘this is my instrument,’” Colbeck explains with a sardonic grin adorning her face.

In fact, it wasn’t quite that random; with family backgrounds firmly entrenched in music, there seems to have been very little leeway when it came to how the ladies would express themselves.

“I always listened to my dad play the Who, CCR (Creedence Clearwater Revival) and Paul Simon, and I was like, ‘I want to do that,’” recounts Rachel Scott, the group’s guitar picker. “I would dance around to it, and there’s video of me doing it … it’s embarrassing.”

“I grew up in the mountains, and my mom used to hold folk concerts at my house … and my family in England, they’ve been singing folk songs since the beginning of time,” keyboardist Emily “Wombat” Isacson recalls her upbringing around music, and even notes that she carries her family singing sessions with her on her iPod.

Certainly their deep roots in music have fomented their passions as well as their style of cracked-cymbal, consummate garage rock – an unadulterated expression of rock ’n’ roll so pure, a blissful overdose may be possible. A rare bona fide that even the girls themselves recognize makes it hard for them to find a musical space where they live.

“A lot of musicians we’ve met from England … were like, yeah, you guys would fit in a lot better [there],” Scott says.

“Since a lot of the bands that I think we fit in with more are there, we want to organize an independent tour of England this summer,” Colbeck begins to explain and then quickly diverts into a conjoined thought, “We’re all at the point where we need to take the next step, talking about how we want to be a band and just do it.”

It might be temptingly easy to imagine that a group of four girl musicians with an unrestrained ability to rock would easily be able to exploit their gender capital and parlay themselves into a gimmicky success, but Jade Banger makes it clear that option’s not even on the table.

“People who don’t know us would probably say you could march down to Capitol records, they’ll see four girls … and you could sign right now, be on MTV, be on TRL,” Scott begins.

“With a lot of cleavage,” Colbeck interjects.

Isacson finishes the thought by putting it to rest, “But that’s not what we’re about.”

What they are about is a mostly unintentional integrity that comes across in everything they do. From the raw sound of the band’s recordings to the careless perfection of the members’ gypsy clothing accessories, Jade Banger has an image without having bought one.

It’s a guttural authenticity that’s exemplified in the way they flourish their e-mails, “Peace, love and get banged.” Delicious.