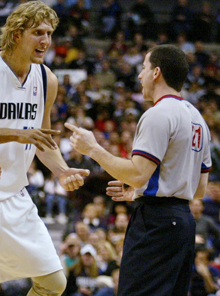 As you read this article, there’s probably a kid in Las Vegas shooting hoops, wearing the jersey of some NBA superstar, waiting for the next Lakers preseason game at Thomas & Mack Center. Thanks to Tim Donaghy, this may be all the NBA that exists in Las Vegas for quite some time.

Rocked by one of the biggest scandals in professional sports, NBA referee Donaghy, a 13-year veteran, is suspected of betting on NBA games he officiated and tipping off gamblers to confidential information.

Of course, the irony is that Donaghy didn’t actually gamble through Las Vegas, or any other legal gambling means. So, whether the NBA relocates or expands into the Las Vegas market should not be affected by recent events.

Yet people seem to be missing the core of the situation. There are issues that most people really don’t think about when analyzing the Donaghy scandal.

One night, discussing this very issue with a good friend at a bar, we hit upon what is probably the most important issue – how would we really know what a “bad call” is? Due to erosion in officiating in the post-Jordan era, would we be able to distinguish a “bad call” from a “good call,” let alone assume that a “bad call” is made for the purpose of fixing an NBA contest?

Who do we trust in such an analysis? Do we just take David Stern’s word that Donaghy really acted alone?

On the one hand, it’s normal for there to be questions about the integrity of officiating and whether officials can really be trusted. Of course, the NBA will stand its ground in saying that no one else is involved. Not to mention, morale among NBA officials themselves is low.

“We are a badly wounded group,” a retired NBA referee told CNN/SI, who desired anonymity. “We call each other almost every day and say, ‘How are you today? I had a bad one.’ You have to understand that this cuts to the core of what we do. The people who referee at this level have a passion for the game that is beyond what anyone can imagine. And Donaghy has taken that and degraded it.”

Indeed, NBA officials are in a bad spot. According to a recent nationwide survey – conducted by Zogby Poll, which surveyed 7,362 people from July 27-30 – 61 percent of NBA fans suspect that Donaghy is not the only corrupt referee.

While Commissioner Stern insists that Donaghy is a “rogue, isolated criminal,” only 18 percent of those surveyed believe him. Hence, it’s no surprise that Stern is calling this scandal the “worst that could happen to a professional sports league.”

According to the same survey, approximately 88 percent of respondents said they believe Donaghy hedged his bets by affecting the outcome of games he worked.

OK, so fans’ trust is shattered. The NBA – and its referees – took a black eye. Questions abound about whether Donaghy really was a “rogue, isolated criminal,” as Stern puts it. Here are a few facts to consider about Donaghy. First, it’s reported that he made $260,000 during the 2006-07 season.

The NBA official quoted above also told CNN/SI that Donaghy was obsessed with officiating the NBA Finals. “If the league office told him to stand on his head for two minutes before every quarter,” the ref says, “Donaghy would do it. He was obsessed with becoming a Finals referee to get the extra money. And you know what? He was probably on his way to being one.”

Senior officials who work the NBA Finals can earn as much as $75,000 extra. Second, he was known for calling fouls by the book. A technical following of the letter of the law means Donaghy called a lot of fouls and violations.

According to Covers.com, Donaghy’s officiating crews finished with the third-highest fouls-per-game rate in 2005-06 and the fifth-highest in ’06-07. However, as to which fouls are whistled by which referee is not disclosed to the public.

By calling the game so closely, so technically, Donaghy became the prodigal son, a favorite of the league, a model official. At Stern’s July 24 press conference, he stated that Donaghy ranked in the “top tier” of officials.

Donaghy’s approach would be used to the benefit of gamblers. Here’s how it worked. He allegedly told gamblers with ties to organized crime which three-ref crews would be working which games. Even the two teams playing the game in question did not know who the three-ref crew would be until they arrived to the arena.

As for the game itself, if it was officiated by Donaghy and another whistle-happy ref, the result would be more foul shots, which would lead to more points being scored – and no time taken off the clock. The teams’ combined output would thus have an excellent chance of exceeding the over-under total.

According to Covers.com, games that Donaghy worked “showed about a 60 percent lean towards the over” in the last two years; only two refs met the over more often. It was the best of both worlds for Donaghy – ensure the over bet was exceeded by calling the game by its literal translation … a case of doing bad while appearing to do good.

So those are the facts that surround the case. Indeed a travesty – a bad situation all around.

“The most frustrating thing refs hear is that we have it in for a certain [player or coach],” says the official. “That goes to the core of our integrity. But all the comments that were not real serious before, the ones that rolled off your back, will be different now. People are going to look at refs with raised eyebrows because one of us committed the ultimate sin. And that's going to be awfully tough to take.”

Yet, with a lack of transparency in the NBA and how it governs itself internally, there will always be questions about the integrity of those officiating. Players and coaches alike have been complaining about terrible officiating – without any hint of game fixing or scandal. Aside from a few top-level referees a majority of NBA officials call the game sloppily. This has been an ongoing problem for almost a decade – and basketball is the only professional sport where fans are constantly and consistently up in arms about terrible officiating.

At least in other sports, it’s clear what the rules are and how the rules are violated. While human judgment is an important aspect for any person who enforces the rules of the game, basketball is the one game where there is perhaps the most subjectivity.

The transparencies in other professional sports are far more apparent than in basketball. What needs to be done is professional basketball needs to clearly define how to officiate a game. They need to clearly define what happens when a referee commits “the ultimate sin.” Furthermore, they need to make these rules clear to the public, so fans know what they are watching, and we can decipher whether a referee is honest or not.

It would be impossible to completely weed out the bad guys. Invariably, there will always be someone who ruins it for everyone.

The problem is not that one guy. That “one guy” will always be caught. His or her life will catch up with him.

Instead, the problem is that the quality of officiating is so bad, so sloppy and so hideous, that it is hard for us to believe Stern when he says Donaghy acted alone. We want to believe him. Many of us would not want there to be another Donaghy.

Yet until the NBA cleans up its act, it will be hard for us to trust Stern, or his referees, when they try to convince us that this is an isolated incident. With the amount of money the league invests into its referees – what, with Donaghy making $260,000 last season – it would behoove the NBA to take stock of the individual lifestyles of those it employs to maintain the very integrity and sanctity of the game.

Maybe Stern can start by refunding the money to each player, coach and owner who was fined for complaining about the officiating in the last eight years. At the very least, Stern should refund fines assessed to a player, coach or owner who directly complained about a game officiated by Donaghy – especially if the game can be linked to Donaghy’s illegal acts. I am sure Mark Cuban is sitting somewhere in an arcade chuckling at this very notion.