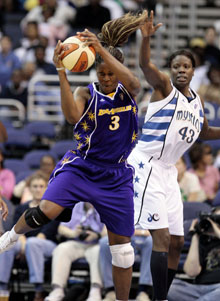 With the WNBA’s reigning Most Valuable Player Lisa Leslie sitting out the season with her first child, fans of the Los Angeles Sparks are realizing more than ever how valuable she really is. Her absence, coupled with the early retirement of All-Star Chamique Holdsclaw, has left a large void in a Sparks’ offense that threatens to miss the playoffs for the first time in nine years.

But while the Sparks’ young players lack the veteran leadership that would have propelled them to a number of significant wins this season, the youth and vitality of the developing team has allowed them to stay in games late and compete against and defeat a number of better WNBA squads. Sparks’ fans hope that this ability will speak volumes for the bright future of the young but talented team.

Now, just three games out of the final playoff spot in the West (all stats as of Aug. 2) and coming off a big win against a slumping New York team, players like rookie standout Sidney Spencer and new addition Taj McWilliams-Franklin are hoping that their recent play will trigger some new energy into the league’s most loyal fan base.

With five of their last nine games at home against tough opponents, including Phoenix and San Antonio, Los Angeles’ next home stand should provide a litmus test for their ability to play well under pressure. If they can prove themselves near the end of the season, whether they make the playoffs or not, they should be a formidable opponent when they are back at full strength when Leslie returns at the start of next season.

While a majority of sports fans here in Los Angeles are enjoying the summer sun and the baseball season, Los Angeles has proven over the last number of decades that they are a basketball town first and foremost. With the season winding down, it seems like the perfect time for fans of basketball to head down to the Staples Center, cheer on their team during the final push towards the post-season and show their appreciation for women’s basketball here in the city of Los Angeles.

The next Los Angeles Sparks home game is Aug. 9 vs. the Washington Mystics at Staples Center. For more information, visit www.lasparks.com.