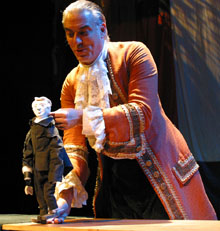 The story begins when the ship’s surgeon, Gulliver (the amazingly talented Keythe Farley, co-author of “Bat Boy: The Musical”), is lost in a storm at sea. He arrives in Lilliput, a land of miniscule men at war with equally miniature men from the island of Blefuscu.

The Lilliputians try to convince the “man mountain” Gulliver to wreak havoc on the Blefuscu army. With a few swift movements the giant doctor could wipe out the Blefuscu Imperial Fleet, but Gulliver is outraged when he learns the reason for the war.

The Lilliputians crack their eggs on the little end of the egg, and the Blefuscu people crack their egg on the big end. The egg-cracking war is an allegory for the war between the Protestants and the Catholics.

Soon, Gulliver is off to Brobdingnag, a land of giants. This time Gulliver’s role is reversed, and he is the miniature man.

He draws the favor of the queen, but evokes the ire of the queen’s jester who tortures him in a jealous rage. The jester is cast out of the society, and Gulliver learns that the giants are not politically savvy, but their laws are just and gentle. Gulliver’s traveling box (read cage) is seized by a giant eagle, and he is carried off the island.

After his ship is attacked by pirates, Gulliver is marooned on Laputa, a flying island of mathematicians and great thinkers. The Laputans have no emotional connection.

Gulliver travels to the land of Houyhnhnm where horses are intelligent, and men are reduced to their most vile barbarous nature. Men are called Yahoos (Swift invented the word that is popular in modern vernacular).

It’s in the land of the Houyhnhnm the comic play takes a dark turn. When the horses realize that Gulliver is a Yahoo with clothes, he’s cast out of their society.

After living among the gentle and wise creatures, it’s impossible for Gulliver to live in human society. He shuns his family and spends his time in the stables.

Though the Actors’ Gang uses puppets, music and magic to tell the tale, this “Gulliver’s Travels” is not a children’s story. It’s full of sly irreverent humor and dry wit.

There are quite a few scatological references as well, some from the original source material. Gulliver is tasked to “make water” on the king’s castle in Lilliput to douse the fire. Gulliver lowers his trousers and makes the water. There is also the matter of the large dung heap the man mountain leaves in Lilliput, shown with shadow puppetry and topped off with a Dairy Queen curly cue.

The play is a fascinating mix of sophomoric and crass wit and social themes. At heart “Gulliver’s Travels” is a satire positing many thought-provoking puzzles of the human condition.