Planet of the Apes Double Feature: Aug. 19 @ The Aero Theatre 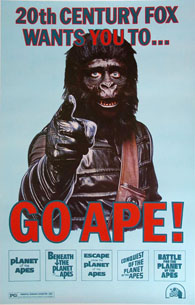 Some people are legitimately famous. Others are notorious. Charlton Heston manages to be both. Somehow managing to be both Moses and the national symbol for the NRA, Heston’s career has clearly managed some diversity. Heston, a former heartthrob for all those now in their geriatric prime, is most famous for his handling of the Ten Commandments, his cannibalism and also his run in with a certain planet of apes.

Now, the Aero Theatre in Santa Monica is playing a back-to-back double feature of both the original Planet of the Apes and its lesser-known sequel, Beneath the Planet of the Apes. Where’s Mark Wahlberg in all this? Probably still in swaddling clothes.

Planet of the Apes tells the tale of an astronaut stranded on a planet that he does not recognize. Giant apes, supposedly more advanced now than humans, control the world, using human beings as slaves. The surprise twist of the movie is probably the best known scene, where Heston is standing on the beach screaming as he stares into the face of the Statue of Liberty, realizing that this is, indeed, his New York.

In Beneath the Planet of the Apes, Astronaut Brent is sent out to look for Taylor (Heston). In his search, he discovers the ape civilization that Heston ran into as well as a secret sect of hydrogen bomb worshippers. Somehow, that’s not a recipe for a happy ending.

The Aero Theatre is located at 1328 Montana Ave. in Santa Monica. For more information, visit www.americancinematheque.com.