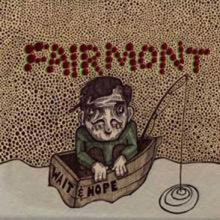 On the surface, it seems like there could be great depth to Wait & Hope. The album features intriguing song titles like “Since Day One I’ve Been Plotting Your Death,” and the band proudly boasts the title of the album comes from a quote from Alexandre Dumas’ classic The Count of Monte Cristo.

Unfortunately, the lyrics do not live up to the cleverness of the titles and the music. A throwback to the garage bands formed from early ’90s alternative, this album is fairly forgettable – even as you listen to it. This might be forgivable for a debut album, but this is Fairmont’s fourth studio album.

It isn’t until the seventh track, “Dahlia” that we see any musical variety, but this brief interlude into soft, reaffirming rock soon suffers from the same repetition problems of the other tracks. While Wait & Hope is a bit of a shame, you can hear some great songs emerging if only they had been explored a bit further.