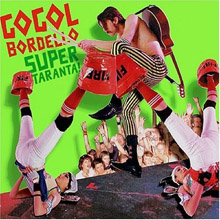 Salt Lake City’s DJ Kahn recommended Gogol Bordello to me recently, stating, “These guys are so cool. I think you’ll really like them.” He might’ve been a little off base with that one. After all, the guy’s from Utah, so maybe that Rocky Mountain elevation has gone to his head. Regardless, Gogol Bordello and its latest release struck me as nothing more than a cheesy novelty. Unlike Gorky Park in the ’80s, this Russian theme octet leaves a lot to be desired.

Sure, its songs are campy. From title to execution, tracks like “Super Theory of Super Everything” and “My Strange Uncles From Abroad” are amusing, but are you willing to blow dough on funny crap? Probably not.

I will give Gogol Bordello this: its following is loyal to a fault. I’ve heard fans call this group the “present-day Primus.”

While nowhere near as funky as Claypool and company, they do possess a certain murkiness that parallels those former princes of Prog. Gogol Bordello is the type of band that will play well to frat boys the world over – too drunk to realize that it’s not cutting-edge music they’re listening to but, instead my surly Eastern European landlord, Danny.