Off the Cuff May Be Off-Putting To Some, But Advice Is Solid 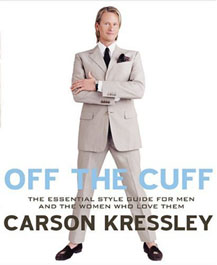 Carson Kressley is on a mission to save men’s wardrobes everywhere, and he has a lot left to do. After all, when the fashion expert looks out across the landscape, he sees a plague of unsightly pleated khakis and a surging tide of polyester that threatens to take over the world.

He’s changed the looks and lives of only a few dozen poorly dressed men on the hit television series "Queer Eye for the Straight Guy." To reach out to more of the terminally unstylish, the member of the show’s gay Fab Five has come out with a book, Off the Cuff: The Essential Style Guide For Men and the Women Who Love Them (Dutton, $24.95).

This book is written with tough love to let people know that what they’re wearing is not OK, and though Kressley wraps his advice in jokes and racy playfulness, he’s blunt with the badly dressed. He’s not afraid to write, "If you are that guy who thinks you look super cool in parachute pants and Members Only jackets, you need to listen to what your spouse or best friend is trying to tell you." He tells men who wear sneakers with a suit on their morning commute, "Don’t ever, ever do that, or, Prada help me, I will personally come and rip those shoes off your feet."

But for those who can stand being mocked a bit, this book is full of solid fashion advice that’s appropriate for most anyone. Kressley’s not writing to teach you how to dress like him, or even how to wear what’s in style. In fact, "disregard trends" is the first of Kressley’s Ten Fashion Commandments. This book is about looking good, and feeling good as a result. Plus, it’s full of laughs along the way.

He even spares clueless dressers some of the blame. The fashion world is confusing, he writes, and the days when fathers taught sons about suits because that’s all anyone wore to work are over. Now, picking clothes is like telling a first-time cook, "`Okay, here are 90 million ingredients. Make something tasty and delicious, but we’re not going to tell you how.’"

That’s why this book covers everything. It goes through every piece of clothing in a man’s wardrobe, one at a time, telling you, for example, how to pick a good dress shirt, including what the length of the sleeves should be – about an inch past your wrist bone.

There’s even a whole section on socks, explaining color and materials, with a separate box addresses sizing – socks are sized one and a half sixes larger than shoes. In another chapter, clear illustrations demonstrate different ways to tie a good tie.

Kressley also gives hints about some of the nuances that can lend fun or panache to a quality wardrobe, in case you master the basics. Not only does he tell you the secrets to shoes and socks, he explains when and how it’s fine to go sockless. A casual setting is key, as is foot powder. Stinky feet? "Not appealing, people."

Not all of his suggestions fit the typical college lifestyle, however. He’s an advocate of frequent trips to the dry cleaner and the tailor, which might be tough for students who struggle just to find change for the washing machine. He also writes that sweats are not to be worn except at the gym ("Something with the word ‘sweat’ in it should not be a part of your regular wardrobe," Kressley writes.) but then how will football fans show their spirit at late-season games?

No matter. This book is basic enough that it is applicable to men of every fashion persuasion, with the possible exceptions of lumberjacks, drag queens and gangsta rappers. There are tips on suits for working stiffs and advice on jeans, polo shirts and tees for more casual dressers. Kressley even addresses hair and body care.

Some of his suggestions are outside the mainstream, but Kressley takes care to keep from pushing his readers too far. Yes, he does promote manicures and pedicures, reassuring the frightened by telling them there should be no nail polish involved. But he understands that regular pedicures aren’t for everyone, merely begging those who wish to avoid the salon to at least cut their toenails on occasion. "Your toenails should not be weapons or the star of a new television series called ‘When Toenails Attack,’" he writes.

Colorful cartoons provide an extra laugh while clearly illuminating fashion do’s and don’ts. The book could even use a couple more in certain spots – a discussion of different collar styles can get pretty confusing without illustrations. On the other hand, though they’re only cartoons, the illustrations in the underwear chapter might be a bit off-putting to those who don’t really want to see a guy wearing a banana hammock (which is a fashion don’t, by the way).

Those with more modest sensibilities might find parts of this book too vulgar. A book that describes the proper fit of pants must mention the crotch someplace, and though Kressley exercises some restraint in this area, his puns aren’t rated G, either. Anyone who does not want to know exactly how excited the Abercrombie and Fitch catalog makes the author might want to get fashion tips from a different source. So might die-hard vegetarians – Kressley tells his readers that shoes should be made of real leather, and most belts too. He says he’d rather buy fur than health insurance.

Aside from that, the book is full of good advice. But the jokes and the racy exposition are what make this book so uniquely Carson Kressley. The book, which turns those sleeveless white undershirts from "wife beaters" into "domestic partner beaters," can be a fun read even for those whose clothing taste is beyond criticism.

As for the less refined, Kressley spurs them on to the refrain of "Don’t dream it, be it, people!" In the struggle for a happier, more confident, more beautiful world, Kressley urges readers on to their personal clothing best – and away from the pleated khakis.

Daina Klimanis is a senior majoring in journalism at the University of Maryland and an intern for KRT Campus.