The Polyphonic Spree: The Fragile Army 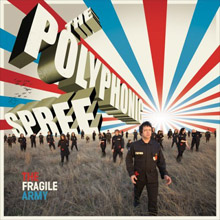 This, not their previous release, is the album that should have been called Together We’re Heavy. Appropriate that these sun worshippers would eventually be blessed with a surfeit of gravity, pulling their songs into a denser concentration of sound while adding gravitas to their lyrics.

When the electric “Get Up and Go” climaxes with this solitary group standing in front of the tank that tries to trample love, it’s obvious we’re beyond light and day. Equally satisfying, for the first time since their KCRW version of “It’s the Sun,” the Spree captures digitally one of their grandiloquent live shows.

It’s difficult to trammel the experience of a 20-member ensemble/church choir on 11-inch Labtec speakers, but with “Running Away,” the band has impressively imprinted its kinetic epicness with its “ah-ahhs” and flute riffs.

The experimental “Light to Follow” proves that the Spree does its best work with some allusion to photons in the song title. It opens with a Pure Moods meets Air electrobeat before DeLaughter enters, alone, only to be countered with a singular female voice, borrowed from the Postal Service, chiming in before the entire ensemble joins, then quiets back down to allow an operatic wail to add to the song’s surreal feel. It’s acoustic Magritte.

The Fragile Army is currently available.