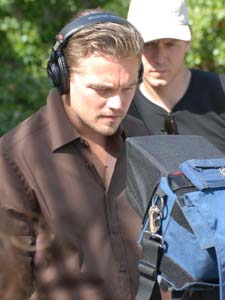 Remember how much fun it was to go to your friend’s house when you were a kid and trash his/her bedroom during a long day of play? And did you just revel in the fact that you could walk away and leave your poor buddy to clean up the mess? If you answered yes, then you’re probably one of the many culprits whose bad childhood behavior has carried over into an environment-polluting adulthood.

In the new film, The 11th Hour, our world – and the crisis surrounding its future – is profiled. This project is the edgier, under-the-mattress version of 2006’s An Inconvenient Truth.

It marries unforgiving MTV-style imagery (Think Nine Inch Nail’s “Hurt” video.) with intelligent commentary from over 70 renowned scientists, environmentalists and architects of today. In addition, the face of this documentary is much more youth culture-friendly with the presence of Academy Award-nominated actor Leonardo DiCaprio (who also produces and narrates).

DiCaprio has, for years, been a huge proponent of “living green.” Unlike many celebrities his age who flash their gas-guzzling sports cars and lead fanciful lives of excess, DiCaprio has worked tirelessly to spread the message of worldwide awareness coupled with personal responsibility in the ongoing fight to save our planet.

“It seems now – more than ever – that we’re at a real tipping point,” says the actor about the state Mother Nature. And he’s right. Since the Kennedy administration in the ’60s, the world’s population has doubled.

That increase in people has led to a boost in goods and services needed by each and every one of us. This is called “consumerism.” According to the filmmakers and experts in The 11th Hour, the C-word is one of the main activities killing our planet.

“People don’t really derive a lot of happiness from consumption,” stresses co-director Leila Conners Petersen. “What we’re saying is that consumption has gotten out of whack.”

This is an important message, but how receptive will the public be to hearing it over and over again? Let’s face it: the United States is one of the largest capitalist nations in the world.

We love our cars, our bling and our ongoing quest to acquire bigger and better items. We see images of faraway places and rejoice in the fact that we don’t have to live like that. What can the U.S. do to curtail the spending and mass-industrialism that leads to pollution and subsequently, earth’s decay?

Nadia Conners (co-director and sister of Conners Petersen) offers a suggestion: “Drive less, walk more, eat organic, use less, buy smart, live on a smaller scale. More is not more. Bring a bag to the market. Little things really do add up. Reuse something. Share.”

The 11th Hour indeed practices what it preaches. Many of the resources used during production were donated, including the set. Each of the interview scenes was actually shot in DiCaprio’s mother’s garage. The two directors also relied upon their own skills for the majority of the project, deviating from the normal large film crews mainly associated with moviemaking.

DiCaprio and company are ultimately hoping to rally support for their message from young people. They’ve test-screened The 11th Hour for high school-aged audiences and hope that social networking sites like MySpace.com will provide a forum for global action.

As a well-known talent within the field of entertainment, DiCaprio is quite cognizant of his impact on his fans. He remarks, “I think that if I wasn’t an actor or if I didn’t do what I do, then a film like this wouldn’t get made.”

That idealism extends far beyond the construction of the project and continues well into its afterlife. DiCaprio vows that any finances recouped from his investment in the film will go toward various non-profit organizations.

He also promises to stay focused on ecological issues as they play out within the 2008 political race, although he’s disappointed in the offerings thus far.

“I have yet to hear a candidate outline their environmental policy in a way that’s inspiring to me,” he says. For now, DiCaprio will have to remain content that the message of environmentalism will find its way to the masses, even if he has to take the lead as the poster boy for the cause.