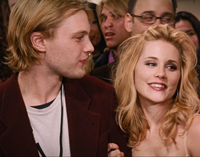 Once upon a time people really did live happily ever after. That happily clause is subject to interpretation and personal relevance, but the book-ended fairy tale concept of life and love will never go away. In Delirious, Tom DiCillo explores a new age of tarnished relationships, manipulation and the overarching concerns with personal satisfaction latent in any relationship.

While Hollywood celebrity, paparazzi and scandal drench our contemporary social climate to a point of claustrophobic suffocation, Delirious and its eclectic cast offer a breath of fresh air to a stale concept. Circumventing celebrity fascination with more questions than indulgence, DiCillo points to celebrity’s all time high as a sweeping indicator of our national mindset. Whether it’s boredom, emotional inadequacies or just a plain lack of imagination, Delirious calls attention to this whole new type of social caste system and assigning of worth.

Lohman’s innate quiet reservation apparent in her real life demeanor radiates throughout her performance and tempers the “party girl” antics of K’Harma. While Lindsay Lohan might not need to research a role as pop diva, Lohman stutters when recalling how she studied up for the role of K’Harma.

“I don’t really go to parties, so I had to see what it was like. I went to Nicole Richie’s book release party...” Lohman trails off with skepticism. Her complete disinterest in a the world tempting her right at her doorstep explains a lot about the success of K’Harma’s character.

Toby happens upon Les Galantine (Steve Buscemi), a paparazzi with many years in the field and still only a dusty portfolio and cheap leather jacket to his name. Living in a cubbyhole apartment where Toby will eventually sleep in the closet in exchange for assisting Les’ photographic pursuits, their relationship builds out of a genuine affinity towards each other’s misplacement and grows into discrepancies around loyalty, manipulation and reciprocity.

Les’ character was originally painted with a harsher brush, DiCillo clarifies, in the hopes of exposing the perpetrating root of celebrity evil. Unlike Hollywood’s glamorous heyday when Ava Gardner would be captured gracefully exiting a limo (with no underwear, or lack thereof, exposed), the media and press of today have fallen into a pattern of downward spiral. Like the TV dinner quality of America’s reality television shows, Les’ all encompassing sleaziness and bottom-dweller typecast exposes the parasitic nature of the entertainment industry.

Toby managed to survive harsh seasons in New York sleeping under newspaper in the park and eating from the trash, but when introduced to the world of celebrity, privilege and entitlement, it’s the first time we see his character really struggle. When casting agent Dana (Gina Gershon) discovers Toby, he’s catapulted to success and a complicated relationship with an older woman. Gershon is sexy, confident, successful and taking what’s hers, including a charged relationship with Tony.

When asked if she has ever dated a younger man, Gershon responds, “I think the better question is if I have ever dated an older man,” dotted with a potent smile and then playful silence.

Add a spattering of cameos and a subplot revolving around Elvis Costello, Delirious is charming with sarcastic humor and surprising moments of deep human connection. With his nose to the independent film grindstone and ears closed to the seduction of high-finance film, Tom DiCillo’s aim is true.