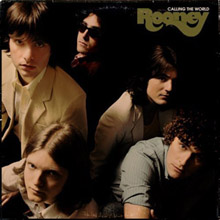 After struggling with what was supposed to be its second studio album and the subsequent split with its label and management, the L.A.-based rock quintet finally released its second official studio album, Calling the World. Rooney’s self-professed desire to recall the past four decades of rock music and reinterpret them into something new is apparent down to the Rubber Soul-inspired cover art.

The band’s new interpretation may leave some listeners cold, including fans of its first release. While the first album seemed more rooted in the ’70s, Calling the World leans more towards the more recent past. The lyrics seem most heavily influenced by the naïve pre-grunge rock of the early ’90s, and the instrumentation and melodies borrow heavily from the ’80s.

Calling the World is currently available.