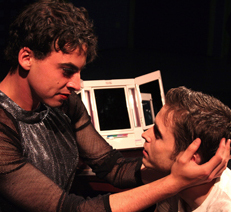 When dark reality invades an unsuspecting gang of sitcom characters, its world may literally come crashing down. That’s precisely what’s laid out in Michael Elyanow’s play, “The Idiot Box,” directed by Jeremy B. Cohen.

Elyanow cites his inspiration for this piece as the time one of his troubled writing students asked him why life couldn’t be like a sitcom. At the time, Elyanow felt boggled by what he called television’s nonresponse to 9/11.

The result is a farcically dark comedy designed with a sitcom-y style soundtrack. But when the laugh track and the music stop, these shallow “Friends”-ish characters transition. They become lost like … well, the rest of us humans.

The play begins as the very bad sitcom characters co-inhabit a large apartment in the big city. The bad jokes go on a bit too long, but the journeys each character takes are fascinating, albeit morbid.

As Fiona, Tisha Terrasini Banker makes a hysterical transition from dopey airhead to academic intellectual. Kelly Van Kirk does a nice job as Mark, the one who brought all these crazy cats together into his apartment. He’s the glue behind the craziness and seems to be the only one who wants to stay in the cliché world he’s created.

Joe Holt plays Omar, the guy who creates the beginning of the end. He’s the outsider who comes into the center of the mix, causing havoc. Anna Khaja, in the lead protagonist role of Chloe, carries the piece from beginning to end.

Some of the goofiest moments include spontaneous somber musical numbers by drag queen Raymond (Conor Lane).

“The Idiot Box” is likely to play to eager crowds throughout its run. Its creativity and uniqueness provide for a memorable, fun and thought-provoking evening of theater.