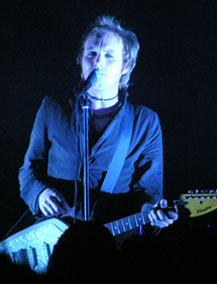 It was a night where many of the boys were prettier than the girls; a night where all of the kids from MySpace.com gathered to compare tight pants and vintage T-shirts. All to see one band: The Faint.

The sold out event turned the Mayan Theater into an all out ’80s dance party, complete with strobe lights, fog machines and big screen projections of obscure, artsy videos. Tightly packed with flailing arms and bobbing heads, the downstairs dance floors and even the upstairs seated areas pulsed with energy. And the band grooved right along, singing songs from their recent release Wet From Birth, each member with his own well-defined stage presence. Originally from Virginia, the Faint’s ’80s electro-pop, goth rock sound was at times dark and provocative, yet always delightfully upbeat.

Preceding the Faint was TV on the Radio, a band with a refreshingly different sound. Soulful crooning from their vibrant lead singer seemed to leave other band members to play the part of the straight man, devoid of much energy or passion. TV on the Radio’s songs, many from their popular release Desperate Youth, Blood Thirsty Babes, captivated with haunting bass lines, drumbeats, harmonies and unique guitar riffs.

Beep Beep, the night’s first opening band, was a different story altogether. Through obnoxious, heavy screamo they were a couple of nerdy-looking guys who really weren’t half-bad. Their unique charm did a lackluster job of impressing the diehard fans of The Faint.