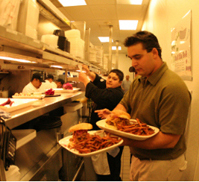 If you were going to make a digital media-themed restaurant, which audience would you go for: families out for fun, tech-savvy high school and college kids, or L.A. sophisticates looking for a new experience? Unfortunately, Nolan Bushnell, the founder of uWink (as well as Atari and Chuck E. Cheese), obviously decided to try to appeal to all of these groups, but succeeded with none.

Walking in, the restaurant is under-lit and under-decorated with bare white walls adorned only with images that seem to be randomly selected from Flickr projected onto them. There is a bar, but the perpetual noise of the restaurant and proximity to the tables makes it less than relaxing.

The tables themselves feature the restaurant’s key selling point – a point-of-sale unit that has been modified to load video games and other digital entertainment. In other words, each table has a touch screen display in the middle from which you can order food, play lackluster games and look at images that have been floating around the Internet for years at the cost of about a third of the table area.

Perhaps the biggest let down is that the automated system means that food comes out as soon as it’s cooked. Appetizers that are more complicated may come out after main dishes, and diners are often left waiting for their friends’ meals to come as their own dishes cool for minutes.

The food itself is high-end for family fare with burgers and sandwiches headlining, and more chic gems like the Crispy Sushi Roll and the $9.75 Mac and Cheese hiding on the digital menu.

To its credit, uWink’s menu is fairly tasty, and the touch screen ordering allows for meal customization, which is fortunate because waiters do little more than bring out plates.

With a revamp of the system and some better games, uWink could have potential but, as it stands, slow, disorganized service and an unfocused gimmick overshadows the quality food.