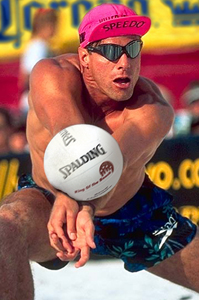 The three-peat is the first for a women’s team since Jean Brunicardi and Johnette Latreille did it in 1966-68, and the four total wins match Nina Matthies and Linda Hanley atop the all-time list.

“To win again on the Pier, I’m very proud of this accomplishment,” Walsh said of winning again in Manhattan, inarguably the most sought-after title on the AVP Crocs Tour as not only the longest running event on Tour, but also the home of beach volleyball.

Indeed, the AVP’s No. 1 women’s team, who has won the last 10 AVP tournaments they’ve played, dropped a game to not only Youngs/Branagh but also fourth-seeded Tyra Turner and Rachel Wacholder in the semifinals Saturday, an anomaly Walsh attributed to exhaustion.

“This whole weekend I felt like we were running on fumes,” said Walsh, who along with May-Treanor has won 35 straight matches, only four of which have been in three games.

May-Treanor and Walsh will have their names engraved on the Manhattan Beach Pier for the fourth time. The duo will travel to Boston next weekend to attempt to extend their streak at the inaugural AVP Crocs Tour Boston Open.

Rogers and Dalhausser earned their second straight Manhattan Beach Open title, something no men’s team has done since Karch Kiraly and Kent Steffes did it in 1991-92.

“It’s pretty huge,” Rogers said. “Right now it hasn’t sunk in. Two plaques on the pier, not a lot of people have done that. I’m tired. Phil and I, we’re hurting. I could tell that he had a low energy level. I was trying to keep mine as high as I could because it’s the Manhattan Beach Open.”

Visiting the men’s final on Aug. 12 was the University of Southern California football team, as they took a break from its practice schedule to take in the men’s final.

“This is the Wimbledon of beach volleyball,” said head coach Pete Carroll. “Manhattan Beach is everything. This is where it all got started, right here. This is a very famous place and a famous event.”

Honored at the open was Karch Kiraly, who has won eight Manhattan Beach Opens and has rewritten beach volleyball’s record books through his illustrious 25-plus-year career. Kiraly will retire at the conclusion of the 2007 tour and could not play in the Manhattan Beach Open due to an injured soleus. He’s rehabbing to try and play the final three tournaments of his last season.

At the tournament, Kiraly explained he has a strong love for the game and will never completely leave beach volleyball, despite retiring this year. He will still play a role in helping the AVP raise funds in order to have the tour visit more cities and increase awareness of the game.

The three-time Olympic Gold Medalist started playing beach volleyball at the age of six, when his parents took him on a vacation to Santa Barbara, Calif. After playing the game at a local beach, Kiraly was hooked.

He played on the beaches as much as he could until his college days at UCLA, where he played indoor volleyball, and where he also earned two of his Gold Medals. His third Gold Medal was in the 1996 Games in Atlanta, where he medaled for beach volleyball.

In explaining his transition, Kiraly stated he was a natural beach player, and he only played indoor because that was all the organized volleyball that existed when he started playing – there was no professional beach volleyball when he played early on.

Now, Kiraly has watched the sport grow from a casual pick-up game on the beach to a spectacular event held across the country during the summer with tens of thousands of people attending the games. Much credit can be given to Kiraly, who has kept himself in perfect shape over the years and continues to play for love of the sport.

“Karch” is Hungarian for “Chuck,” which his parents would refer to him as since birth (Kiraly’s birth name is Charles.). While he easily explained the root of his European nickname, he was baffled when asked to explain his other nickname, “Thunderball in Volleyball.”

“I have no idea where that name came from,” he assured.

For anyone who wants to pursue a professional career in beach volleyball, Kiraly gave this advice: “practice, practice, practice. The outdoor game is a lot harder. You cannot specialize as much since there are only two players. It’s harder to play on sand, and you battle the elements. Keep playing, and you will be fine.”