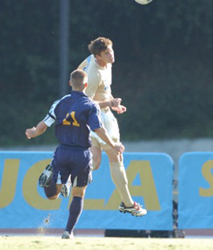 A 94-year-old Australian great-great-grandmother who quit school at 12 is said to have become the world’s oldest person to earn a university master’s degree. Phyllis Turner, from Australia’s Adelaide University, received her master’s degree at the beginning of August.

Turner left primary school to help her mother look after her siblings when her father left the family. She enrolled at prestigious Adelaide University to study anthropology at age 70, winning honors in 2002 before moving on to her master’s.

International investigations showed she was the oldest postgraduate degree recipient in the world, and the school will be trying to enter her into the Guinness Book of World Records.

STARS HEADLINE VIRGINIA TECH TRIBUTE The Dave Matthews Band, John Mayer, Nas and Phil Vassar have signed on to headline a free concert for students, faculty and staff at the Blacksburg campus in honor of the 32 people killed in April by a student gunman. The memorial show will take place Sept. 6 at the University’s Lane Stadium. Corporate sponsorships and merchandise will cover the cost of putting on the event; all of the acts have waived their usual fees.

UCLA MEN’S SOCCER PRESEASON FAVORITE College Soccer News recently rated UCLA as No. 1 in its preseason rankings. With eight starters back from the 2006 national runner-up team, UCLA beat out No. 2 Duke and No. 3 UC Santa Barbara for the top spot.

The defending Pac-10 champions, California, were ranked 13. No. 5 Santa Clara and No. 25 San Diego State were the other California schools ranked in the poll. UCLA starts their season in Indiana vs. Notre Dame on Aug. 31.