Deep Water: The Ship Heard 'Round the World 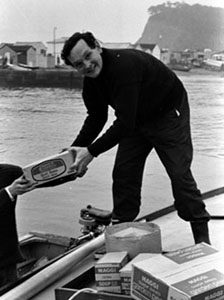 With an inclination towards the ocean and a passion for human life, Osmond directs Deep Water with a true affection for storytelling. Recapturing the recent past in the epic tale of Donald Crowhurst’s attempt at a one-man sail around the world, Osmond assures us that more than anything this is a story of human nature.

“When we dig our own holes, and then panic and keep digging,” she explains, the human response to maladies or challenges is to stick to our guns and continue in the direction we began. For most, this means day-to-day mistakes or petty arguments: to Crowhurst, this cost him his life.

While working on another project, ironically also about an ocean bound mishap, Osmond used her free time to strike up a life changing conversation with a colleague. The director of photography began to tell her the story of Donald Crowhurst, and each day her ears perked for more information.

As less attention was paid to the current project and wheels were set in motion for the future, Osmond fell deeper entranced with the man who, underqualified and overly determined, set upon a solitary journey that would exemplify the lengths human nature will allow us to go. Crowhurst’s mind is a mystery, built on a solid foundation of a family and steady job, but slowly challenged and manipulated as his unquenchable need for success proved the elasticity of rationale.

The film combines archival footage of the race with current interviews with the never-before-interviewed Crowhurst family, as well as a completely exclusive eight minutes of footage shot by Crowhurst himself aboard his ship. Pages of Crowhurst’s journal chronicling his spiral out of mental and physical control help to narrate the adjunct images into a cohesive emotional tale.

From the voyage’s get-go, mishaps occurred and Mrs. Crowhurst sensed something was wrong. All her maternal instincts told her danger lied in the water for her husband, but she was not going to be the one to say no.

Osmond’s skill lies in her ability to pick up on relationship dynamics, coax out deep emotional universal truths and use them to fuel one individual’s story. This skill is finely honed and particular, as directing documentary film is an entirely different challenge than fiction narratives.

In the documentary, Osmond is working with a script, but one that relies heavily on footage already shot and a story that has already unfolded. With a responsibility to the Crowhurst story as well as one to entertain the audience, Osmond describes her job as putting together a jigsaw puzzle.

“It’s constantly shuffling pieces and talking all the time about it,” she says, it’s trying to put together a 1,000 piece puzzle with no picture of what the outcome should look like. Louise Osmond may speak with the confident eloquence of an accomplished filmmaker, but even she gets nervous in the presence of her subject matter.

“I remember sitting in my car outside the Crowhurst house, absolutely terrified, worried they’d watch the final cut of the film and hate me.”

Luckily for us all, it was quite the opposite. “Without wanting to put words in Clare Crowhurst’s mouth,” Osmond states, “I think she felt a real sense of hope.” Clare gave her blessing, Louise released the breath she had been holding for 92 minutes, and the film entered the documentary floodgates.

With an affinity towards 20th century history, Osmond assures she will reach land born subject matter soon. “I like to make stories for the younger crowd, nephews, cousins, etc,” she says.

Although Donald Crowhurst’s story might be dated 1968, his tumultuous inner battles with self acceptance, determination and constant struggle to grasp reality is one that remains constant throughout the years. He had a dream to sail the world all on his own. Ignoring warning signs and basic principles of logic, Crowhurst followed his heart blindly, but passionately – and it’s impossible to blame him for it.