The Red Jumpsuit Apparatus: Get Warped and Wild 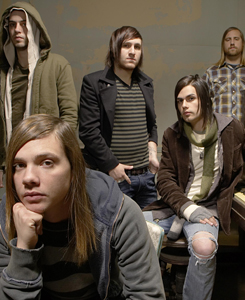 Having survived hailstorms and even tornado warnings, the 2007 Vans Warped Tour seems to be shaping up as the Red Jumpsuit Apparatus’ year to dominate.

“Warped has been amazing. I’ve met a lot of cool people, a lot of bands. I’m having a great time. I’ve been able to play every day and practice, which is awesome,” says drummer Jon Wilkes. “This tour has been insane. I’m really tired, but it has probably been the best one of the year.”

The band has most frequently been chosen as the Energizer band of the day, a fan voting-based competition between all the bands on the lineup to get an extra 10 minutes of set time each day of Warped.

“It’s very cool that it’s the people’s choice and they choose us. We couldn’t be here unless the kids wanted us to be here,” Wilkes says. “We believe in ourselves and our music; we love what we do, but it’s up to the kids whether they like us or not.”

While audiences have certainly responded warmly to his band over the last year since the release of its major label debut, Don’t You Fake It, at the core of its music, Wilkes is aware it wouldn’t have the same impact if the members didn’t believe in it themselves.

“I’m still affected by some of our songs. Some of the lyrics Ronnie writes just go straight to the heart,” he says, going so far as to tell of how their song “Guardian Angel” was used at his grandmother’s funeral.

“I love having deep conversations with people, especially with kids that I just meet,” he says. “Sometimes it’s overwhelming, but I like having one on one situations with people. I don’t want to be that dude that stands on stage and then you never see him again.”

Despite leaving potential openings for less than genuine people to approach him, Wilkes is happy to have that kind of vulnerability. “We’re all human beings, just because I’m in a band doesn’t mean I’m any different than someone working a nine to five. It’s all about how many people you can meet and how many people you can get close to before you die.”

Half jokingly, he adds, “There’s someone working a nine to five that will make more money than I’ll ever see.”

Even so, Wilkes's adamant that he wouldn’t want to live any other way. “When you’re a musician, it can either be a hobby or it can be your life,” he says. “But you have to make that decision and once you do, there’s no going back.”

Don’t You Fake It is currently available. The band will perform at Warped Tour Aug. 25 at Home Depot Center in Carson. For more information, visit www.redjumpsuit.com.