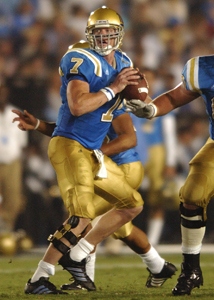 So, will 2007 finally be the year we see the end of the “East Coast Bias?” To the dismay of the Pac-10 Conference, probably not – but that doesn’t mean it will be a lackluster year. If anything, the Pac-10 will play a big factor in determining who wins the Bowl Championship Series (BCS), with a Pac-10 team likely to be one of the teams playing in the BCS Title Game on Jan. 7.

This could very well be the year that everyone east of the Mississippi looks at the Pac-10 as more than just USC and some other teams. Pac-10 schools have played against significant teams from BCS-conferences (Oregon vs. Oklahoma, California vs. Texas A&M, California vs. Tennessee, UCLA vs. Notre Dame), and this year will be no different.

If the Pac-10 performs well in these games, expect more than just eyebrows to be raised. All of these games have BCS implications, and the early favorites in the Top 5 may be thrown out of whack based upon them.

Two of the teams carrying the torch for the Pac-10 are in our backyard – USC and UCLA. Both make Angelinos forget that the NFL exists.

It’s possible that these teams will end up 1-2 in the conference, with USC probably winning all of its games and representing the PAC-10 in the National Championship Game. It’s no surprise that Southern Cal enters 2007 with so much hype and expectation. The team is well coached and has several returning starters, including Heisman candidate John David Booty.

The team that may make a lot of noise is UCLA. Under the tutelage of Karl Dorrell over the last four years, the coaching staff has built a solid program worthy of being a Top 10 team this season. Should USC play in the BCS Title Game, the door is open for UCLA to play in the Rose Bowl.

UCLA doesn’t play USC until December, so it could be in the hunt for the Pac-10 championship for most of the season. There is loads of talent on both sides of the ball. Remember, the Bruin defense held USC to only 9 points last year, and that was not an accident.

The rest of the conference will also be solid. California will likely be ranked in the Top 15, while Oregon State should also finish in the Top 25 and play in a legitimate bowl game.

Arizona State, Oregon and Washington State should also make some noise this season, especially with Oregon playing Michigan and Washington State playing Wisconsin. Washington has a better recruiting class under Ty Wellingham, and Arizona may not appear in a bowl game this season, but winning five or six games is not out of the question. Stanford appears to be the only weak spot (What else is new?), and a three-win season will be considered great progress.

Nonetheless, three of the four California teams will be Bowl-ing at the end of the season – USC, UCLA and California. With that, let’s focus on the two local teams and how they will impact college football this season.

Many USC supporters were “disappointed” by the 2006 season, where the Trojans were 11-2 and beat Michigan handily in the Rose Bowl Game, but saw a 33-game win streak end to the hands of Oregon State and a loss to cross-town rival UCLA for the first time since 1998. Nonetheless, expectations are high in 2007. They have a team capable of running the table and should compete for the national championship.

The Trojans have a returning starter at the gun. Senior John David Booty, a 6-foot, 3-inch, 215-pounder from Shreveport, La., is already among the greats at USC and a Heisman hopeful.

Entering this season, Booty has thrown for at least 200 yards in 11 career games. Most of those numbers came in 2006, his first year as a starter. The USC Team Captain started all 13 games, completing 269 of 436 passes (61.7 percent) for 3,347 yards and 29 touchdowns with nine interceptions.

USC Head Coach Pete Carroll has nothing but praise for Booty, saying, “He’s got great accuracy. He’s a natural thrower. His poise is awesome. His execution, his accuracy, his decision-making are great.”

Indeed, Carroll’s words rang true last January at the Rose Bowl where Booty had a 391-yard, four-touchdown performance that secured his spot as USC starter, while allowing him to throw his hat in the Heisman race.

The only flaw in Booty’s game is his knack for passes being knocked down at the line of scrimmage. Expect that deficiency to be addressed in 2007, as USC brings in a new Offensive Coordinator – Steve Sarkisian – who introduced a new shotgun formation to help address the matter.

Booty will not be doing it alone. The team has 15 returning starters, including 10 on defense. In addition, the recruiting class is one of the best ever, overflowing with blue chip athletes.

Booty will rely on a solid core of receivers to make up for the losses of Dwayne Jarrett and Steve Smith. Stepping into Jarrett’s spot will likely be junior Patrick Turner, with 41 career receptions. At 6-feet, 5-inches and 220 pounds, Turner is a great target and go-to guy on third downs.

Winning a starting job is sophomore Vidal Hazelton. Other players to watch include redshirt freshman David Ausberry and sophomore Travon Patterson, a speedy 5-feet, 10-inches and legitimate deep threat, who is one of SoCal’s fastest players.

Booty will have a lot of thanking to do to the quicker, more athletic Offensive Line, which includes two-time All-American tackle Sam Baker. Despite losing All-American center Ryan Kalil, new additions Matt Spanos at center and Jeff Byers, a former National Prep Player of the Year, at guard should help. The O-Line also has experienced starters Chilo Rachal (guard) and Drew Radovich (tackle), and depth.

The biggest question mark on the Trojan Offense is running back. Carroll brought 11 tailbacks to camp. The running game suffered last year due to injuries, and it showed against UCLA (48 yards rushing) and Michigan (55 yards).

While the starting position is still undecided, expect Chauncey Washington, C.J. Gable, Hershel Dennis and redshirt freshman Stanley Havili to all make serious bids for the starting role, with the nod likely going to Havili. Joe McKnight, considered by many to be the nation’s top tailback recruit from Louisiana, will primarily be used as a receiver this season.

On the other side of the ball, expect nothing less of spectacular from the Trojan defense. It’s this defense, one that smothered and absolutely shut down a potent Michigan team at the Rose Bowl, which gives USC the best shot to win the national championship.

The strong, athletic bunch, with 10 returning starters, will be led by lineman Sedrick Ellis and middle linebacker Rey Maualuga, a Junior All-American candidate who will be on the Butkus Award list. Also returning is third-year starter Keith Rivers and Brian Cushing, the Rose Bowl Defensive MVP. Four defensive backs are returning starters, while two back-ups have starting experience.

If the Trojans had holes in 2006, then many of those holes were filled in 2007 with experience and one of the best recruiting classes in college football. There’s no reason why USC should not go 13-0 this season.

There are only two games on the schedule where USC is ripe for a loss – Nov. 10 at California, or Dec. 1 versus UCLA at the Coliseum. Yet both of those games are winnable, and if USC comes out of the UCLA game unscathed (It’s the final regular season game for both teams.), then USC will play in the BCS Title Game on Jan. 7.

Across town in Westwood, there’s a lot of hope that they’ll be standing side-by-side with their brethren from the Land of Troy on the national stage. The Bruins had a roller coaster 2006 season, where they were 7-6 (5-4 in the Pac-10), including the upset win against USC, only to get hammered by Florida State in the Emerald Bowl.

UCLA is banking on the experience provided by 20 returning starters to make a run at the Pac-10 title and a BCS bowl game. Karl Dorrell, in his fifth year at UCLA, will have a lot to prove. In four years at UCLA, he has a respectable 29-21 record. Yet his bowl record is not so impressive (1-3).

The Bruins will be searching for more consistency in 2007. Case in point: they beat USC 13-9 in the final regular season game of 2006, but were walloped by Florida State only three weeks later, 44-27. Such inconsistency lasted all season, as UCLA started strong at 4-1, then lost its next four, before winning its final three regular season games.

UCLA’s offense sputtered in 2006, averaging only 23 points. Under Dorrell – considered an “offensive player’s coach” – the Bruins have surprisingly struggled on offense, going through four offensive coordinators in the last five years.

That fourth offensive coordinator will be making his Bruin debut on Sept. 1 – former Nebraska assistant, Jay Norvell. Under Norvell, UCLA will probably resort to the shotgun offense, while using more complex schemes with various options and push for a more up-tempo game.

Of the 20 returning starters, 10 are on offense. UCLA operated under a two-quarterback system last year – but only due to injury.

Ben Olson started the 2006 season, but could not complete due to injury. In 2006, Olson had a 63.7 percent completion rate, 822 yards passing, five touchdowns and five interceptions.

Patrick Cowan finished the season, with a 52.5 percent completion rate, 1,782 yards passing, 11 touchdowns and nine interceptions. Cowan was effective, but nowhere near as agile, mobile, strong or statistically strong as Olson, who should return as the starter this year.

At tailback, freshman tailback and top recruit Raymond Carter will miss the season with a knee injury. Accordingly, UCLA will rely on Chris Markey, who had an impressive 2006 campaign, where he had 35 receptions for 261 yards, and 227 carries for 1,107 yards and two touchdowns.

This season, Markey will be relied upon to carry the ball, with a few balls thrown his way in the backfield. He needs to stay healthy, as the UCLA backfield lacks depth, speed and experience. Accordingly, the entire UCLA running game will fall primarily on him, while Kahlil Bell and Chane Moline – who combined for 93 carries last season – will make contributions.

The all-important offensive line looks solid and aggressive, as the Bruins adjusted their line to protect their offense, reverting to traditional left and right side alignments. Chris Joseph moved from guard to center, Noah Sutherland was moved from tackle to left guard, and Micah Kia was put at left tackle despite spending 2006 as a backup.

The UCLA defense allowed only 19.9 PPG in 2006. With 10 returning starters – including senior All-American defensive end Bruce Davis – look for the defense to be just as stellar in 2007, if not better.

Davis led the nation last year with 12.5 sacks. Four of the returning starters are on the frontline, while many scouts have UCLA ranked as the best secondary in the conference.

UCLA will unlikely beat USC. With such strong defenses at both schools, expect another low scoring game, with USC barely squeezing past UCLA – only because the game is at the Coliseum.

Expect another fast start this year, with none of the early games against Stanford, BYU and Utah – presenting a challenge. Playing at Oregon State on Sept. 29 will be the Bruins’ first true test, followed by Notre Dame, California and Washington State, respectively.

UCLA went to five consecutive bowls and should have no problem qualifying for a sixth. With a favorable schedule, UCLA’s sixth consecutive bowl appearance will probably be in a BCS Bowl.