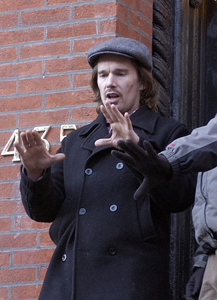 Ah, the pangs of first love. In Ethan Hawke’s new film, The Hottest State, romance in all its blissful and heartbreaking stages is explored.

Mark Webber (Storytelling) plays William – a smugly attractive, New York-based actor who falls madly in love with a down-to-earth singer-songwriter, Sarah (Catalina Sandino Moreno). The writing is on the wall with this relationship from the get-go, but the long and winding road throughout is so tempting that neither can resist.

Although he’s sat in the director’s chair numerous times before, this project marks Hawke’s first time daring to adapt his own material for the big screen (especially when the novel that the film is based on was first published over a decade earlier).

“I kept thinking about this book. I directed my first movie, Mark Webber was in it, and I started thinking about what a good William Harding he would be,” says Hawke.

This latest creative foray from the Academy Award nominated actor/writer/director (who also costars in the movie) bares the unfortunate brunt of having to live up to the reputation of its literary counterpart. When the novel was first published in 1996, critics spanked it with all the right buzz words, calling the effort “touching” and “engaging.”

Tongues wagged over speculation that this was not just some tender New York City tale of love lost, but that it was actually based on Hawke’s alleged romance with singer-songwriter Lisa Loeb. Although neither will corroborate such an accusation, Hawke does finally give up one small ghost: “I was using details of my real life to create authenticity for [The Hottest State].”

Sure, there are obvious differences between the book and the movie. For starters, instead of setting the bulk of the romance in Paris as it had been written, Hawke has relocated that storyline to Mexico. Another notable liberty taken is the changing of Sarah’s ethnicity from a Caucasian girl with curly hair to an earthy Latina.

Moreno manages to encompass her character with complete clarity. She taps into the gawky and sexually awkward undercurrent that makes Sarah such a relatable heroine.

“I needed somebody who had a lot of soul, who was both incredibly beautiful and looked like a normal person and didn’t look like a model,” Hawke muses about his leading lady. “I felt Catalina has that kind of enigmatic quality that a true, great heartbreaker must possess.”

Webber is also a decent facsimile of the young man Hawke fashioned after a much younger, greener version of himself. He’s well versed in his conveyance of William’s rapid decent into quasi-stalkerdom. At times, it’s almost painful to see him rebuffed by the object of his affections over and over again.

However, that engrossing spark of electricity juxtaposed with insatiable hunger that runs throughout the book is somehow missing from the movie. The film tends to sidestep some of the more sentimental plot points while mocking a lot of the novel’s angst. This may have been a deliberate detail on the part of its creator.

“Now [The Hottest State] feels like somebody else’s life,” explains Hawke. “My life is no reflection of this anymore. I have two kids. One of them is 9-years-old. I’m divorced. I’ve been a movie actor for years. I hoped that I could take what I learned and use a more mature camera, for example, to encapture it.”

That maturity also unfolds in other ways. There are no sugary-sweet love songs flavoring the film. Instead, Hawke enlisted the help of a very talented friend to lend a lucid nature to the movie’s soundtrack. Composer Jesse Harris dipped into his own music catalog for the songs that would play against each of the scenes.

For anyone who has ever given their heart to the wrong guy or girl, The Hottest State is a divine wink to bleeding hearts. But a quick word to the wise: pick up the book and see the film.

After all, companionship isn’t just limited to men and women. It’s also imperative in art as well.