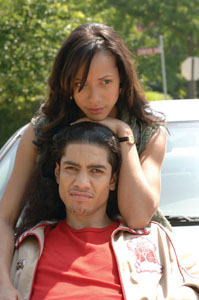 Wanda De Jesus (Blood Work) and Rick Gonzalez (Coach Carter) play a mother and son on the run from the mob in this gritty and violent flick that pays homage to the classic mob films of the ’80s.

Millie DeLeon (De Jesus) is the modern day heroine. Beautiful, educated and sophisticated, she has a torrid past, but is living an idyllic life raising two sons in a suburban neighborhood after losing her drug-dealing boyfriend in a shooting 20 years earlier. Her world is soon shattered, and her plans to flee the city are thwarted when her oldest son, Wilson Jr., refuses to leave with her.

Produced by John Singleton, Tender has more plot holes than bullet holes, and although it teeters on the brink of being another classic mob flick, it lacks the clever execution of a decent plot. Director Franc Reyes pays homage to his picturesque hometown of Puerto Rico, where we meet reggaeton superstar Tego Calderon in his big screen debut.

The performances in Tender are convincing, and Reyes deserves some kudos for slightly steering away from stereotypical roles and giving his characters a semblance of intelligence. But it just isn’t enough to turn this into a blockbuster.