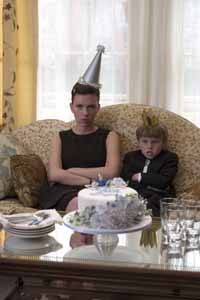 There’s nothing more annoying than arriving at a social function and finding someone else standing there, wearing the same thing that you are. Especially when the outfit in question looks so much better on them. That’s the overwhelming bummer to befall The Nanny Diaries.

The film stars Scarlett Johansson as Annie. She’s a recent college grad who winds up working for a total bitch on wheels.

Her family and friends have grown disappointed in the person she’s become as a result of her new job. She becomes despondent and almost breaks under the pressure of it all.

But in the end, this career girl learns valuable lessons about herself and the crazy industry in which she has toiled. Sound familiar? That’s probably because this is the exact same premise of 2006’s The Devil Wears Prada.

While Johansson is much more believable and likable than Anne Hathaway’s character in the aforementioned, even she can’t save this one-note chick flick.