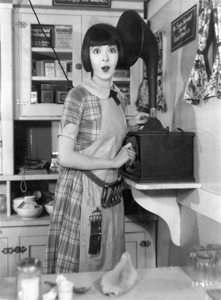 Comic book lovers revel in the circus that is Comic-Con, complete with actors dressed up as the super hero du jour and a surfeit of products that more or less relate to the characters. Cinephiles, a tad less ostentatious, celebrate their love for all things film with an annual Cinecon. This year, the Society for Cinephiles throws the 43rd annual Cinecon classic film festival and memorabilia show over Labor Day weekend.

For those who love movies but perhaps haven’t had the chance to be exposed to the classic films that made Hollywood’s mark, Cinecon 43 offers up an unusual and entertaining bunch of titles. The bonus of watching them at the Egyptian allows the viewer the illusion of stepping back into a different Los Angeles, as well as the delight of seeing these pictures on a large screen.

The five-day festival offers a rare opportunity to view films in a theater that rarely – if ever – see the light of day anymore. Cinecon, with access to the major film archives and Hollywood studio vaults, often manages to find and screen long forgotten prints of films that have never been released on DVD. The genres range from comedy and drama to musicals and westerns.

Some of the highlights from this year’s crop of pictures include silent greats like Tillie’s Punctured Romance. Made in 1914, UCLA recently restored Tillie, considered the first feature length slapstick comedy. The movie stars Charlie Chaplin and is directed by Mack Sennett, creator of the Keystone Kops.

Other interesting offerings include the 1937 movie Girls Can Play starring a 19-year-old Rita Hayworth and billed as an “early day A League of Their Own” and Hollywood Speaks from 1932 which will be seen for the first time since its original release, 75 years ago!

Seeing Hollywood Speaks, along with Paramount’s first 100 percent all talking picture, Interference (1928), would provide an excellent introduction for any cinema novice or a greater depth of knowledge for those familiar with the origins of movies. In total, over 30 rare features and shorts will be screened.

Cinecon 43, like Comic-Con, sponsors a Movie Memorabilia Show offering rare movie stills, posters and other related items like lobby cards and books from the silent and early sound era.

The Egyptian Theatre is located at 6712 Hollywood Blvd. in Los Angeles. For more information, visit www.cinecon.org.