The Confession: Has Nothing to Hide 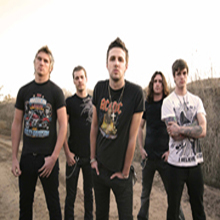 The members of the Confession fancy themselves skilled players of rock-paper-scissors. A challenge was issued, they willingly accepted, and guitarist Kevin Fyfe went head to head with an … unnamed journalist. Someone won and someone lost, and this article is only being written because of whom between the two filled the winner’s slot and who filled the loser’s.

Not to say the fact that they won a game of chance should cast any doubt on their skill or worth as musicians, it just means this article won’t totally tear them apart. This article will not say the members of the band are cocky, that they party excessively or that they ride on any other band’s coattails.

The band members are very confident in themselves, they do know how to have a good time and they do have some friends in high places watching their back, but what’s so bad about that? As frontman Taylor Holland Armstrong says, “I don’t want people to like us because we sound like another band. I want our music to be its own entity. Love us for everything that we do.”

Though they fit in well with their Orange County metal and hardcore brethren, Fyfe, along with fellow guitarist Justin Norman, bassist Matt Pauling and drummer Jeff Veta, mirrors Armstrong’s sentiments over asserting the band’s individuality.

“We have so many musical tastes, and there are no restrictions in any way with this band,” he says. “If we want to do a 30-minute piano solo, we’ll do it. That doesn’t mean we’re going to, but there’s nothing holding us back from doing it.”

Utilizing more colorful analogies for his band’s journey, Armstrong says, “Coming from Orange County, we thought it was all khaki slacks and butterflies, but we learned quickly that you have to work hard and nothing’s handed to you.

“When you’re in a band, these guys become your family. We’ve all learned to be better friends and be more patient with each other because of that. “

As a testament to their commitment to proving themselves more than a passing trend, Armstrong doesn’t hesitate to say he researches the best in his field for inspiration, and not just the ones from the last three years of rock.

“I always loved watching the great frontmen, the guys who could sing really well and captivate an audience,” he says. “I always thought that was so cool to have such a power over people by singing.”

Considering they’re primed to be the next breakout band from their scene, the audiences Armstrong’s aiming to command only look to be getting bigger.

The Confession’s Requiem is currently available. The band will perform at Warped Tour Aug. 25 at Home Depot Center in Carson. For more information, visit www.theconfessionmusic.com

Interviews
Billie Eilish isn’t stressing over the Grammys. She’s busy worrying about the end of the world
950 views

Interviews
With new fans aboard, Korn shows how to metal in middle age
774 views

Interviews
Jade Jackson may be the next big country-rock star. But first, she has some tables to wait
1,080 views

Interviews
YG was ready to drop a new album. Then his friend Nipsey Hussle died
869 views

Interviews
For Vampire Weekend, East Coast prep is out, and L.A. dad vibes are in
813 views