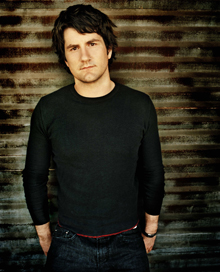 “When I was a little kid, I wanted to be in Def Leppard,” says Matt Nathanson. “I wanted the tight pants and fire to shoot off my drums.”

Perhaps not the admission one would expect from an artist known for his stripped down musical style and haunting lyrics, but Nathanson is very rarely exactly what you’d expect. Fans who surf his Web site know him for his comedic nature and irreverent attitude toward the music-making business. Anyone who listens to his music can tell how much of himself he puts into the crafting of each song.

And as for the hair metal?

“I realized I didn’t need a band to make a song,” he shares. “I grew my mullet out.”

The influences that are easiest to hear in Nathanson’s work are the Indigo Girls, Tracy Chapman and Suzanne Vega. They were the first musicians that made it “through the hair band shield” as Nathanson likes to put it, and the musicians that taught him that amplitude isn’t everything.

“It blew my mind that acoustic shells could be that potent,” he relays.

Though Nathanson is most widely known for “Laid,” his contribution to the American Wedding soundtrack, the man has been making music for almost 10 years and recently released his latest album, Some Mad Hope.

This new album, he explains, grew through an evolutionary process unlike any of his others. “I love the way this record came together,” he says. “It was a combination of processes.”

There is no one way that Nathanson composed the songs for Some Mad Hope. Occasionally the lyrics came first and the music was born out of it, sometimes the music brought to life the poetry that completed it. It was, he says, the most organic way that the record could have come together.

“This was the record that I felt I didn’t want to stop until I got it right,” Nathanson assures. “It was the first time between the song production and band that everyone was communicating to make the perfect record.”

Some Mad Hope is currently available. Nathanson will perform Nov. 3 at the Troubadour in West Hollywood. For more information, visit www.mattnathanson.com.