BLACK PRESIDENT: Ignite a Revolution, One Show at a Time 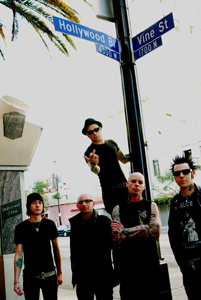 Black President is a newly formed supergroup comprised of some of the most influential musicians in the punk world today. Christian Black of the Dee Dee Ramone band and Strychnine Babies is on vocals; on guitar are Greg Hetson of Bad Religion and the Circle Jerks and Charlie Paulson from Goldfinger; and Ty Smith of Guttermouth and Bullets and Octane is on drums. Jason Christopher sometimes sits in on bass.

With a name like Black President in times like these, I needed some questions answered. I recently had the chance to sit down and talk with guitarist Charlie Paulson.

So, a lot of people might think that you’re supporting Barack Obama for President …

Well, why did you guys get together?

We got together a couple years back in our off time from our other bands to play covers and be loud, and over time developed into a genuine band. We realized that we wanted to say something that no one else was saying.

The punk that we grew up with is all but gone. No Black Flag, Minor Threat, Fear. It doesn’t exist anymore.

What about the new bands in the punk world?

As far as new bands playing that kind of music, it sounds neutered. You’re either a super agro-emo band like Converge, or you’re My Chemical [Romance]. You don’t see a Black Flag shirt in Hot Topic anymore, and if you did it would be out of place.

What is the message that Black President is trying to get across?

The first record is gonna be about really taking a look at how fucked up things are right now. I want people to hear this music and start thinking. Start realizing that shit isn’t OK.

Bands like Rage Against the Machine were important because they had something to say. I believe you need to beat people over the head with things and make it as simple as you can.

Black President comes more from the Black Panther way of thinking. Shit is fucked up – change it now.

Do you think the media is helping get the message out there?

I would love to be able to believe Fox News, because according to them, everything is cool. If Fox News is heroin for idiots, then we [Black President] are the rehab.

That’s pretty straightforward. Do you think the people are going to be able to get into it?

I have hopes that the average dude that likes us ’cause we’re large and fast. They’ll eventually hear what Christian is saying and maybe act on it.

Who do you think should be President?

Fat Mike for President. NOFX. That dude is right on the money.

He is so well-read, knows what he’s talking about and Punkvoter.org is huge. He devoted two years of his life to get people to do something.

The lyrics say it all. He’s not afraid to be black and white with people. Sometimes the truth isn’t always good news.

What are your fans saying?

We get letters from people saying we kick ass, but ask us, “Why are you anti-Bush?” I reply back with, “Because we give a shit about this country.”

People are actually paying attention to what we are saying. They are screaming, “About fucking time!”

So, what is the band up to right now?

We are doing California dates for the Warped Tour then getting in the studio. Since Greg is in Bad Religion we have to wait on their current tour to get the record going. As soon as their tour is wrapped up we hit the road again.

It’s cool to be in a band with your friends and have so much experience behind us. And it’s all just in time for the presidential primaries.

Black President will perform at Warped Tour on Aug. 25 at the Home Depot Center in Carson. For more information, visit www.myspace.com/blackpresident.