L.A. Riptide: Bound for the Playoffs 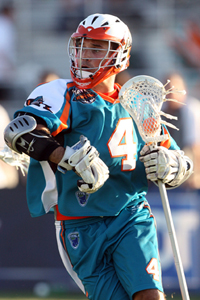 On Fan Appreciation Day the Los Angeles Riptide lacrosse team gave the 3,895 in attendance at the Home Depot Center plenty to appreciate. Not only did attackman Michael Watson’s overtime goal give the Riptide a come-from-behind 14-13 overtime win against the Chicago Machine, but it also clinched the Western Conference title, the league’s best record at 9-3 (including a perfect 6-0 home record) and a trip to the NB Major League Lacrosse Championship Weekend in Rochester, N.Y. on Aug. 25 as the No. 1 seed.

The Riptide will face the Rochester Rattlers in one semifinal with the Philadelphia Barrage vs. the Denver Outlaws in the other semifinal. The winners face off in the championship game on Aug. 26.

In only its second year of existence, the Riptide became one of the fastest L.A. professional teams to win a conference title. With two wins this weekend, the Riptide could become the fastest team in Los Angeles ever to win a championship.

“You know that L.A. loves a winner,” says Riptide coach John Tucker. “This wouldn’t have been possible without the support of our general manager G.W. Mix who put this team together and built a winner almost immediately.”

Watson, who scored the game-winner at 2:54 in overtime had three goals in the game for a team-leading 31 for the season.

“Right now we’re playing great,” says Watson. “We’re really excited about the playoffs, and with the chemistry we have I think we can win it all.”

One fan, Chris Reck came all the way from Rancho Santa Margarita to attend the game with his dad and six of his friends to celebrate his 10th birthday.

“I’ve been playing for about two years,” says Reck. “It’s a cool sport, and it was exciting to meet some of the players.”

Vlad Anderson Sr. and his son Vlad Anderson Jr. drove in from Lake Forest to attend the final game of the season.

“I wanted to come here to see how the pros play,” says Vlad Jr., 12. “After seeing the Riptide I think more people will catch on because lacrosse is a lot like soccer, but with more action.”