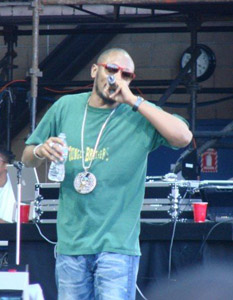 It was a long journey out into the desert. Slowly, the big buildings gave way to smaller ones, and blocks of houses gave way to hills and mountains.

Then all of it, aside from the heat, gave way to tens of thousands of people cheering and jumping to the sounds Supernatural, David Banner, Immortal Technique, Pharoahe Monch and EPMD – the first five artists to kick off the show.

The crowd was still growing as people trickled in to catch a glimpse of Mos Def and Talib Kweli. Both men showcased their equally genius MC skills.

The incredible powers of Chuck D and Flavor Flav were able to come together and unite under the guise of Public Enemy and rock the stage like no other. The two busted out classics “Fight the Power” and “Shut ’Em Down.”

After Public Enemy came the Roots. They played a few classics when, wait … Nas?! Yes, Nas, who had previously been slated as a no-show, suddenly came out from the back and performed two incredible songs backed by the Roots to a stunned and elated crowd.

Later on, the excitement was apparently too much for some fans, as they decided to throw mace bombs and send the crowd running with tears and burning throats. After 10 or so minutes, the Wu-Tang Clan came on stage and rocked the mic.

The drums came out, the Red Star banner was draped in the background and the chants of “We want Rage!” grew. The crowd broke down the gates and stormed the stage to get as close as possible.

The cheers amplified as Tim Commerford took his bass in hand, Tom Morello wrapped his guitar strap around his neck, Brad Wilk gripped his drum sticks in each hand and finally Zack de la Rocha came out, grabbed his mic and paced around the stage. Rage Against the Machine was together again.

De la Rocha said he believed this generation could be the greatest generation, but he wasn’t quite sure yet. But if the people took action as intensely as they were during Rage’s performance, there’s no doubt we would be looking at a worldwide revolution of peace, freedom and true equality in about a week’s time.